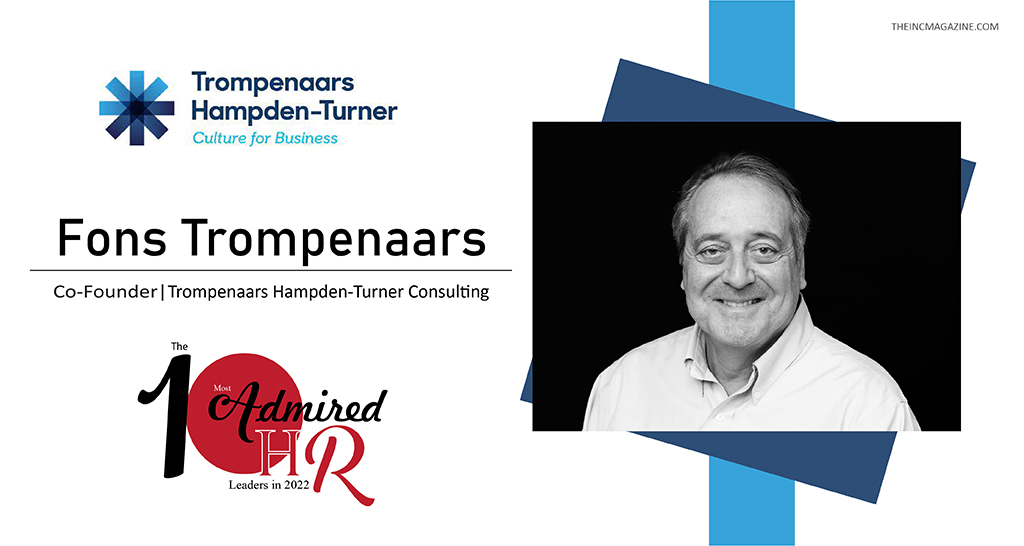 Meet Dr. Fons Trompenaars, a Dutch organizational theorist known worldwide for his work as a consultant, trainer, motivational speaker, and author of many books on culture and business. Dr. Fons has spent nearly 3 decades of his life helping various Fortune 500 leaders and professionals manage and solve their business and cultural dilemmas to increase global effectiveness and performance in globalization, mergers and acquisitions, HR, and leadership development.

In 1989 Dr. Fons, along with Dr. Charles Hampden-Turner, co-founded Trompenaars Hampden-Turner a consulting and training organization for international management. At a later stage Prof. Peter Woolliams joined and to help build an impressive digital platform.

“Trompenaars Hampden-Turner began with Charles and I in 1989; I remember Charles saying, when I was young, I am afraid that people are going to steal our ideas, now that I am older, I am afraid they don’t.”– says Dr. Fons.

It all started with Dr. Fons’ economics degree at the Vrije Universiteit Amsterdam, followed by a PhD. at Wharton, University at Pennsylvania. His Ph.D. was based on the research of 10 refineries of Royal Dutch Shell, where he looked at the influence of national culture on organizational culture. He soon joined Shell in HR for around 10 years, and the contents of his Ph.D., rewritten in-an accessible version, was Riding The Waves of Culture and went on to become a very popular topic. To date, the book has been translated into 16 languages and sold more than 200,000 copies worldwide. Initially, this was the primary source of becoming an influential HR professional. The book massively focuses on how HR can work in a much more effective way considering cultural differences.

Dr. Fons believes the most common mistake is the use of models and approaches which are culturally bias and based on bipolar models. Most of the time, a good look at leadership literature can reveal the author’s nationality. In the US, for example, the literature oscillates from one extreme to another, from vision to execution, from courage to caution. On the other hand, French literature mainly focuses on a well-educated leader at the Ecole Polytechnique in Paris. And in China, it’s all about Yin, Yang, Mao and Tao.

“So what we need is to get away from the cultural bias in the way we approach HR processes like leadership development. There are models that go beyond culture, like servant leadership. Our bipolar models, of which MBTI is a good example, invite us to work with mutually exclusive ways of thinking.”- says Dr. Fons. He also adds, “So if you score high on thinking, you score low on feeling, by definition. Managing change models are based on the idea that the current culture is bad and we should destroy it for the sake of the new desired culture.”

“This is what we call dilemma thinking instead of saying either-or, and we go for through-through thinking how can I throw value a get more of value b. And that’s the essence of good leadership. So a good leader will not say should we be local or global. A good leader would say what can we do locally to make the company more global.”– Dr. Fons Explained.

After his Ph.D., Dr. Fons joined Shell and understood that HR would be the best place for him. He was sincerely interested in the human side of organizations. Secondly, he felt there was an excellent opportunity to apply the findings of his Ph.D. to an international organization. Soon, after a couple of years, Dr. Fons realized how much fun it was.

He believes Trompenaars Hampden-Turner’s team doesn’t need a lot of external stimuli and push to get motivated for innovation and productivity at work. The passion of team members is very much aligned with the firm mainly because everyone loves a multicultural environment and how it can lead to more innovation through outstanding leadership.

As the Co-founder of the organization, Dr. Fons tries to be a servant leader, helping others perform better. “We are trying in our own way to develop hybrid and blended approaches. That doesn’t only make us productive, but also enable our clients to be as innovative and productive as well.“- Says Dr. Fons.

Over the last 40 years of Dr. Fons’ experience with HR, he has witnessed quite a few changes in the industry. Primarily he believes HR professionals are increasingly becoming partners of their business counterparts. Secondly, professionals nowadays have driven towards a more evidence-based environment, particularly important in a so-called soft area. Trompenaars Hampden-Turner has found that monoculturalism has been replaced by multi and interculturalism in its environment. This is a huge difference because people need to be educated to reconcile dilemmas in multiculturalism rather than expand the differences.

Dr. Fons believe Trompenaars Hampden-Turner is now at a stage where the major challenge is making sure that its interesting content, databases, and methodologies are transferred to a completely new group of consultants.

He says, “This means we should activate our marketing rather than people just calling us because of our name. It needs to be less dependent on names that our consultants and myself have.”

Currently, Dr. Fons and his entire team would love to partner with an internationally operating consulting firm willing to understand the Trompenaars Hampden-Turner’s unique approach.