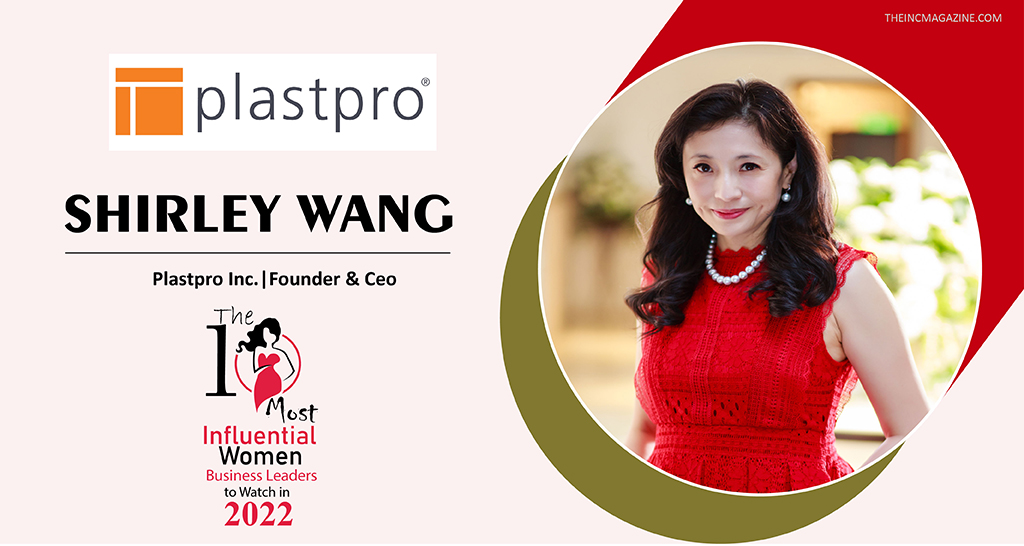 Meet Shirley Wang, the founder and CEO of Plastpro Inc., a fiberglass door manufacturing company. Founded in 1994, Plastpro is a provider of top-quality fiberglass doors with superior value and technology. The organization introduced the first fiberglass door in the market with Hydroshield technology comprising of waterproof surround with composite stiles and rails.

Shirley was born in New York, but after her in the fiberglass door industry at present. parent’s divorce, she moved to Taiwan to live with her maternal grandparents. At this point of time, Shirley witnessed her mother’s struggle as a single mother, which eventually inspired her to have a career and be financially capable.

“It felt important to me, especially being immersed in a patriarchal society, to know that I could be a self-reliant woman.”– she says.

Since her childhood, Shirley has watched women in her family do business. In a male-dominated society, her grandmother had built businesses in Taiwan, Hong Kong, South Africa, and Brazil. While she only had a middle school degree and had limitations in speaking other languages, she taught her colleagues Shanghainese. This showed Shirley that great motivation along with work ethic could help her create opportunities. She learned a lot from her grandmother’s initiatives and resourcefulness and applied them to her life.

While pursuing her undergrad at UCLA, Shirley sold advertising for Daily Bruin and became the number one salesperson, which helped her pay for her college.

After working and witnessing many family members in business, Shirley wanted to start her own business. Although she knew starting a new business was not going to be easy, she established Plastpro from ground zero. Shirley knew that Plastpro could become a success story. However, everyone else underestimated it. People thought Plastpro would fail to supply, deliver, or withstand the test of time yet; Plastpro is now a 28 years old company and Shirley is the longest-standing CEO in the fiberglass door industry at present.

Shirley feels that people gave her and Plastpro a chance because she was willing to listen to her customers and customize products according to their needs. While other manufacturers dictated the available specs and designs, Plastpro was open to determining the customers’ needs. The organization wanted to produce a maintenance-free solution, so it developed the Hydroshield technology, where all six sides of a door are waterproof and maintenance-free.

Shirley says, “We not only care about the outer beauty of the door – we care about the inner beauty. If you rip apart our doors and compare the insides of other companies’ doors, you’ll find that Plastpro doors have the best materials and construction.”

Also, in 2005, Shirley and her team went to build the planet’s first fully automatic fiberglass door company. She states, “We felt that this way we could service our customers better and faster, and most importantly, provide precision manufacturing which ensures our quality time after time. Our products are sold through distributors but can be found on Amazon and Home Depot.”

Shirley became the first Asian chairwoman at UCLA, yet people assumed that she was a staff member, despite having just given a speech as the chairwoman of the board. She says, “I am used to being judged and having people treat me like I don’t belong or try to push me around. You just need to learn to stand your ground, explain your rationale, and make your points.”

She further adds, “As a leader, whether male or female, you gain respect through making tough decisions. At the office or on a board, I believe pointing things out that are not self-serving but in the interest of the collective allows one to become a valued leader.”

Just like many other working women, Shirley feels guilty at work and when she is at home. However, family always comes first for her. She tries to have dinner with her kids at least three to four times a week, and sometimes she even brings them to her business dinners to achieve the goal. She always talks to her kids about how their day is going, and they are aware of the fact that Shirley has their back under all circumstances.

“That said, I certainly burn the candle on multiple ends – work, family, and even play. What is sacrificed is my rest, and I’m learning that is something I need to figure out how to prioritize. I am still a work in progress.”– says Shirley.

As a leader, whether male or female, you gain respect through making tough decisions. At the office or on a board, I believe pointing things out that are not self-serving but in the interest of the collective allows one to become a valued leader.

Lately, Plastpro has attracted various new talents, opening Shirley’s eyes to new things and ways of doing things. She is not looking for any exit plans or quarterly results for the future, but she is building the company to last much beyond her tenure.

“That means taking things step by step, with no shortcuts, and accepting that our reputation is on the line daily. It means focusing on quality and value. It is about putting one foot in front of the other. We’re not going for the sprint, but the marathon.”– adds Shirley.

After Shirley’s husband went through 4th stage cancer, she first realized that our world is fragile and can disappear without notice.

She also learned that our legacy is not fame, power, or money. “We came to this world naked and will be leaving this world naked. When we leave this earth, we won’t be remembered for the house we lived in, our title, or our influence. We will be remembered by those we Loved, Touched, and made a Difference in. I’ve learned that the time to Give is Now. The love we leave behind will remain and endure the test of time.”– she added further.

Vulnerability Can Be A Superpower!