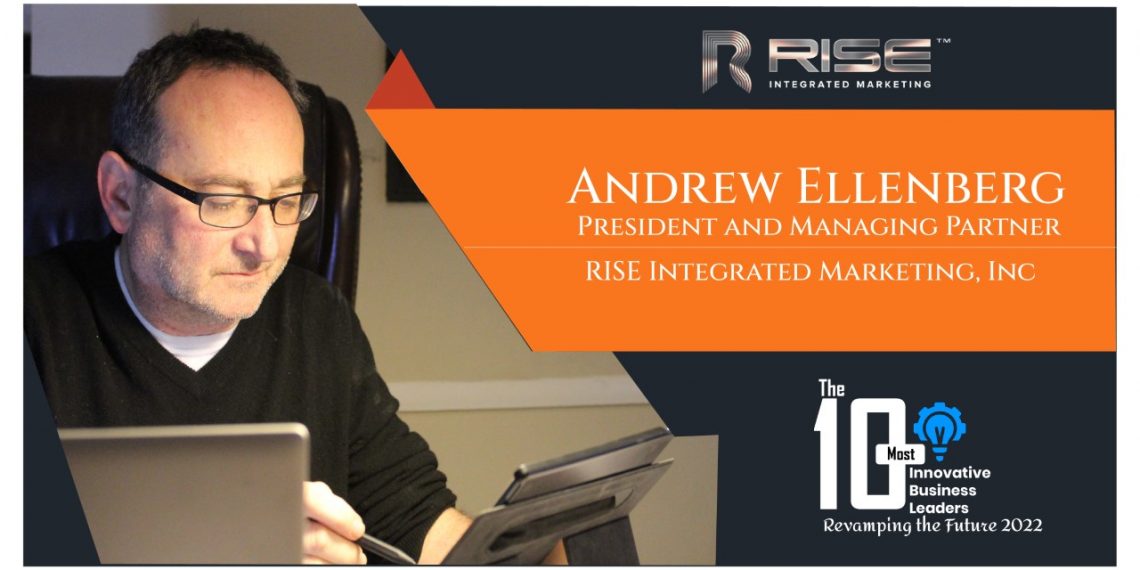 After Ellenberg’s employer acquired one of the most venerable media brands in the industry, the culture changed. What was a locally driven operation came under the command of executive leadership, centralizing creative control at the national level? No longer empowered to launch new initiatives, Ellenberg realized that his best prospects were on the other side of the exit door.

In January 2022, he launched Rise Integrated to help a few other corporate executives who reinvented their careers as entrepreneurs develop and implement multimedia content strategies for their new ventures. From the beginning, Ellenberg knew that he needed to create a brand that would successfully break through the competitive clutter to establish his company as a powerful new voice in journalism and content marketing.

He moved quickly to create inspiring stories and build an audience of passionate fans. It was just a matter of time before business leaders started noticing the difference between the standard blog fare they saw in their newsfeeds all day and the quality journalism that Ellenberg was creating at his startup.

Ellenberg is a former media executive turned visionary entrepreneur with deep expertise in creating, growing, and transforming companies. He served as a top-performing Integrated Marketing Executive for Entercom Communications in the SME accountable solutions group handling small and medium-sized accounts Later, he was handpicked by the President of Radio Operations to set the pace for her national rollout with greater emphasis on ROI-driven digital business models.

Ellenberg has played an instrumental role in cause marketing, such as youth film festivals focused on celebrating diversity with major funding from the private sector and nonprofit foundations. He also created and wrote the business plan for Bloomberg’s financial portal for consumers, developed a strategy, and led product development for live audio updates via Bloomberg InvestorPhone. His next move was to syndicate it to GTE Airfone to distribute it worldwide on most major airlines.

Ellenberg believes one of his most noteworthy accomplishments was when he recruited Karen Mills, a fledgling interior designer and corporate refugee from IBM, to host the nation’s first interior design radio show. It ran for eight consecutive years and generated 400 hours of original programming. Being the executive producer, Andrew negotiated an exclusive partnership with HGTV to populate the show with celebrity guests. He branded it Living Large, which landed in the media popularization section of Wikipedia’s interior design listing alongside Martha Stewart Living.

“Before brands can connect with consumers emotionally, they need to capture their attention. In the history of marketing, it has never been so challenging to reach and connect with consumers. They are cynical and bored with the status quo. Rise Integrated is dedicated to commanding attention via entertaining and engaging original content customized for defensive audiences.”

With the pandemic, Ellenberg lost half of his revenue and income at his corporate job. However, he credits the covid disruption for forcing him to rethink how he wanted his career to look in the next ten years. He calls it the great awakening.

“Faced with the prospect of rebuilding my business for three to five years, I decided that I would never again risk my financial security and future career opportunities on a company that I didn’t control,” he says.

At Rise Integrated, Ellenberg continuously evolves to be faster, better, and cheaper than his competitors, the three primary pillars of innovation. He is reengineering the economics of video and audio production. This value proposition resonates well in an uncertain market environment where business leaders are being pushed to do more with less budget.

Eric Keith from SPACEMOB film studios joined Rise Integrated’s board of advisors in August 2022 as Chief Content Officer to help the company expand its journalism as content marketing services into branded entertainment in short films, documentaries, and episodic series programs.

“We are moving at a sharp vertical angle into journalism as content marketing across a diversified mix of media formats,” said Ellenberg. We will continue to seek out and attract the most talented creators who flock to us to do the best work of their careers for passionate clients.”– Says Ellenberg.