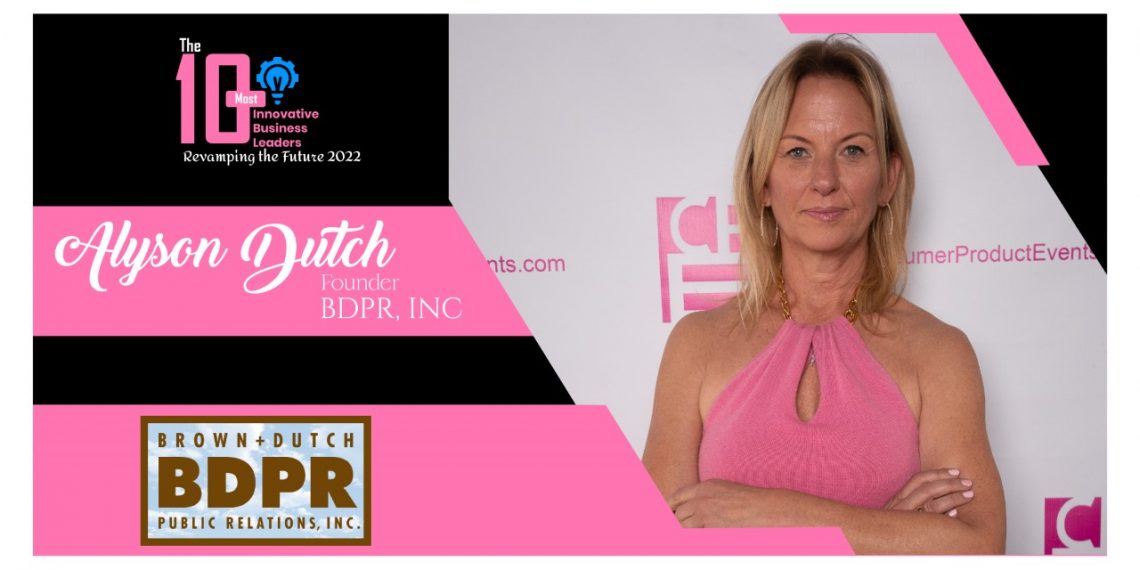 From the moment she left high school, Alyson Dutch knew she would be in the marketing business and it only was due to her family’s arm-twisting that she landed an education in advertising before setting out into the wild world of public relations. Today, the consumer product/services PR specialist has an uncanny knack for extracting the most newsworthy aspects of any product almost immediately. Oddly enough, she sees everything from tech, food, and beauty products to entertainment properties, personalities, pet acupuncture, to eco-luxury hotel properties as “products.” Her superhero-level x-ray vision for this was developed by a high-flying and adventurous career that started in her native Los Angeles at the famed Rogers & Cowan Agency. At Landmark Theatre Corporation, she was a part of the birth of the animation industry as it went primetime. Along the way, she arrived on the Paramount lot where she scandalously absconded with job requisitions that led to providing the publicity for the Miss Universe, USA and Teen USA Pageants for CBS-TV, several trips around the world (and a few to Wichita). Dutch became an international specialist working in cities from Taiwan to Bangkok, a highlight of which was in South Africa representing Sun City during the fall of apartheid. At Baker Winokur Ryder, she was the first to book talent for online “celebrity chat rooms” for America Online and Oldsmobile. Working with many of the world’s best-known celebrities from Elizabeth Taylor to Elton John, Dutch has provided publicity services for the Academy Awards telecast, and the Grammy’s after party and spearheaded many red-carpet events for the nation’s top 10 charities. She has touted the newsworthy attributes of clients such as Mrs. Fields Cookies, Tokyo Coca-Cola’s Green Tea Terrace, Perrier Jouet, Taittinger and Mumm Champagnes, Metabolife, Swatch, the legendary Beach Boys and entrepreneurs whose bras eliminate back fat and basketball shoes that prevent ankle sprains. For nutrition bar company, ThinkProducts, Dutch created a marketing platform and rebranding that set them up for a $417M sale to Glanbia. Her clients have included thousands from tech startups that are multilingual meeting platforms used by the World Bank, to solar-powered electric vehicle chargers for Google and Dealmoon, the largest affiliate seller of Gucci and Ferragamo to Chinese luxury lovers. Other clients have included the luxury ceramics brand from the cofounder of True Religion, Style Union Home.

At the helm of Brown + Dutch Public Relations since 1996, Dutch authored the POM Principle (P for product, O for operations, M for marketing): The 3 Pillars Needed to Status & Sustain Any Business, PR Handbook for Entrepreneurs and launched Consumer Product Events in 2009. Dutch is a writer for Forbes, Inventor’s Digest, and The New Economy magazines, and her companies were named by Goldman Sachs as one of 10,000 Small Businesses in 2020. A mentor for the Small Business Association’s SCORE program, Dutch speaks about consumer product launches at events from INPEX to the International Association of Inventors and served is as a product agent for The Home Shopping Network. For fun, she wrote a book called ‘The Pageant Diaries: Confessions of a Beauty Pageant Publicist,’ and more seriously is also working on the story of her father’s life, “Poopsie,” a Hungarian Holocaust survivor.

As straightforward, genuine, and savvy as they come, Dutch is just as adept at handling industrial tech products to snowboarders, beauty products, dignitaries, and CEO. She possesses an innate knowledge of how to position companies, people, and products to gain a specific objective, whether it be to attract economic investment, find distribution, or to handle a public relations crisis. Her passion for her work drives her to apply her knowledge in a creative, yet methodical manner. In addition, she has a keen understanding of the cultural sensitivities that rule the marketplace and knows how to command the media’s attention.

Dutch sees her personal and business life as one unified vocation. Congruency is her mantra — all actions are connected to truth. She is fascinated and inspired by iconoclasts, individuals, and those who succeed when it appears they should not. Her heroes are people who never finished high school or started out homeless but became billionaires. She has a deep appreciation for those who can “just figure it out.”

For 23 years, Dutch volunteered her time as an emergency medical technician for the National Ski Patrol. She has a penchant for French Bordeaux, Piedmont Italians, fast cars, yellow Labradors, and being outside when the sun is shining.