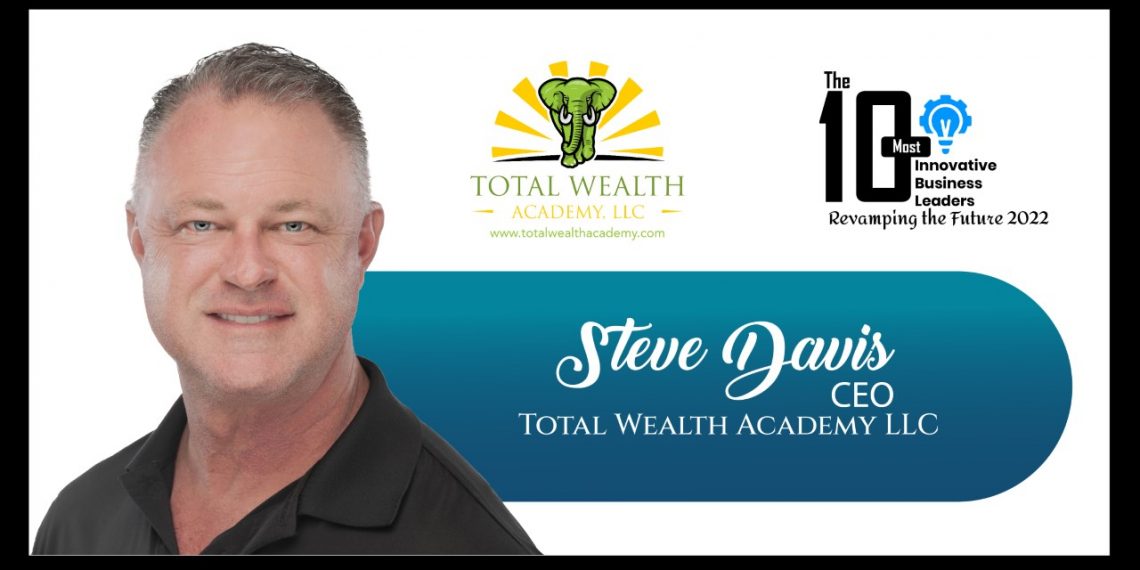 Meet Steve Davis, the CEO of Total Wealth Academy, a mentoring program for building wealth and passive income with real estate. The program exists due to the failure of the formal education system, high school, and college to teach the principles of wealth and money. By the age of 65, 95% of Americans cannot retire even after working for 40-45 years. The organization believes golden years are a golden lie, and it is here to change that. It has studied what the rest, 5%, are doing differently and is teaching its members what that is.

Total Wealth Academy educates and encourages its members and students on everything they need to create a second income stream with real estate. The organization invests in single-family houses, apartments, self-storage, senior living, etc.

After receiving his Navy ROTC scholarship to Texas A&M, and an appointment to West Point, Steve chose A&M to serve in the Marines. However, after two years, he realized that no class could teach him how to get rich. So, he left college to run a hamburger delivery business with a friend. Unable to meet their financial goal, they eventually quit and went to corporate America. However, after working very hard for 60 hours a week for five years, winning national sales contests, and a trip to Hawaii, Steve’s company, cut his pay by $20,000 a year.

This helped Steve understand the stupidity of relying on a job as the only source of income. So, at 27, Steve started studying everything he could get his hands on about building wealth. He bought every book and video he could find, and within two months, Steve quit corporate America and started investing in real estate.

“My motivation to start the company was watching my parents suffer financially when I was growing up. They both worked hard but never got ahead. I remember asking them for toys or whatever and seeing the look on their face when they had to tell me no. It was gut-wrenching. I eventually stopped asking.”– says Steve.

Also motivated by how corporate America treated him and his friends, Steve understood that the most significant risk position for an individual is to depend on a job for an income.

“Jobs come and go. But passive income is forever. I realized people need to know this.”

As a seminar company, Total Wealth Academy was shut down entirely for nearly 60 days. It had to move to almost 100% online education, and the sales witnessed a massive cut by over 70%. However, at this point of time, Steve made payroll and several other things but never laid off any of his employees. He saw this as a challenge to overcome and nothing more. Steve feels it has invigorated him and provided him the confidence to handle anything thrown at him. Currently, the firm’s primary mission is to stop the financial suffering in America by training others with the knowledge rich share with their kids that the poor or middle-class can’t afford. It teaches people how to build a second income stream with real estate that meets and exceeds their needs and wants.

“Through one-on-one coaching and consulting, we take people by the hand, step by step, through real estate investing. We teach active and passive investing in single-family, self-storage, senior living, apartments, and more.’– asserts Steve.

Under Steve’s leadership, Total Wealth Academy’s primary goal is to level the playing field in building wealth. It’s a known fact that the rich teach their kids much differently than the middle class and poor, who constantly pass on poor and middle-class strategies to their children.He explains, “When my son and daughter turned 8, I told them to build a second income stream. I told them year after year. My son graduated college with $4000 a month as the second income stream from his 11 rent houses. My daughter has an even larger second stream of income. Now, some of you may say, “They must be brilliant and hard-working.” They are. But so are you. That is not the difference. They were simply told the right things to do. I suggest that if you had been told the right things to do, you would have done them as well.”

Total Wealth Academy wants to have its own radio shows in every major city in the U.S by 2030, which will teach these principles live on air and tell people about its online financial education.