Home The 10 Most Inspiring CEOs Making a Difference in 2022_profile 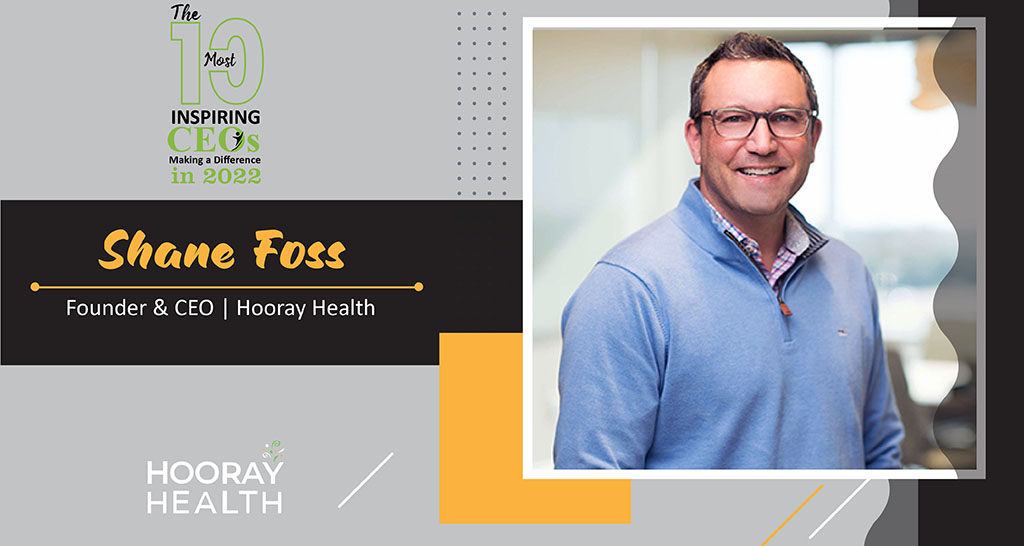 Meet Shane Foss, the founder and CEO of Hooray Health, a limited benefit medical plan provider built to use with a National Provider Network of Retail Clinics and Urgent Care Centers. The organization was founded to fulfill a need in the healthcare industry for affordable, reliable, easy-to-understand coverage solutions that provide employees and their families with the needed access to quality healthcare services.

Around seven years ago, Shane experienced back spasms and went to the urgent care near him. They took an x-ray of his neck and gave him two injections, a muscle relaxer and anti-inflammatory medicine to reduce the pain. At that point of time, he had health insurance, which was a $75 copay for his visit. Initially, Shane thought he owed only $75, but to his surprise, he got a bill of $800 three months later. Shockingly the urgent care told him they had carve-outs for additional services, and Shane owed $800.

At this point of time, Shane realized why most personal bankruptcies result from bad medical debts. So, he thought there had to be a better solution to help people seek treatment with the comfort of knowing the costs beforehand. Eventually, after a month of market research and talking to several industry experts and employers, Shane founded Hooray Health, fully focused on hourly employees who can’t afford high premiums and deductibles. Under Shane’s leadership, the organization focuses on removing the cost barrier to seeking care.

He says, “Too many Americans avoid caring for themselves and their children because they do not know the cost of the care. Hooray Health has eliminated that fear with a $25 copay with no balance bill with a provider network that allows members a worry-free experience because they know it will only cost them $25. Someone needs to fight for the low-income and middle class.”

Servant leadership drives Shane’s life. Whether it is for his family, partners, employees, or investors, Shane’s focus on his responsibility toward others’ success has led to his success. He also believes partnering with people who can complement your strength is very important. His business partner and COO is one of the smartest and most talented persons Shane has worked with in his long career. His work ethic, willingness to learn, and aptitude for organizational structure and process complement Shane’s ability to market and sell products.

Being the founder of Hooray Health, Shane was never afraid to fail because his greatest learning moments have come from those failures. He feels most people don’t understand the need for failure, and everyone is scared to fail. However, some people like him refuse to give up even after a failure and work to adapt and persevere.

“I will never forget that I have been one step from success and utter failure more times than I can remember. I look at every interaction with a person as an opportunity to learn and grow; curiosity drives my ability to communicate with anyone.”– States Shane.

Shane believes success at the end of the day is his ability to continue to positively impact his family’s lives, enjoy his work and the people he works with, and live the active life he enjoys presently.

Shane’s biggest failure was the first business he purchased in 2010. He feels he was not honest with himself in assessing his ability to grow the company under the corporate structure and leadership. It was a miserable five years that could have been avoided if he had said no to the opportunity in the first place. This experience helped Shane realize that poor leadership affects good leadership’s ability to grow and improve sales.

Shane has a collaborative, honest, and level-headed servant leadership style. When a difficult situation arises, he does not get emotional and irrational; instead, he focuses on identifying the core problem, potential issues and discussing the possible solutions. Shane plans to improve the efficiency of the employees by organizing shorter meetings with tighter agendas and participants who can leave the meeting when it is not valuable to them. He is also planning to implement 5 key metrics to focus on leaders, as he feels leaders are drug in too many directions that do not add value to the company.

Since its inception, Hooray Health was never married to a single product idea. Instead, it looks at market trends, listens to its client’s feedback, and, most importantly, reviews the utilization data to offer the most appealing product for its target audience continually.

Shane believes Hooray Health’s market focus will continue to grow at a fast pace, and it will continue to innovate to maximize its competitive advantage. He also expects an annual compound growth rate of 30% over the next few years.