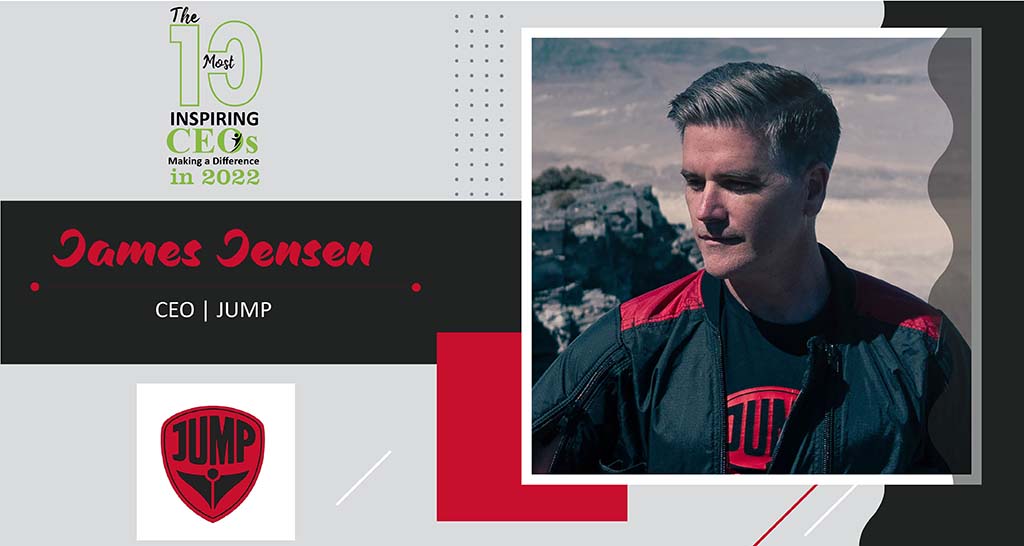 Meet James Jensen, the CEO and founder of JUMP, a virtual reality company that provides users the experience of base JUMPing and skydiving with the safety of a headset. James started his journey as an illustrator, focusing on oil paints, traditional artwork, and airbrushing. He went to school for commercial art and design and got exposed to computers and digital artwork. He soon fell in love with Adobe Illustrator; the undo button, and many other designing tools. Later he founded his own creative agency with those skills and started to work more with visual effects, which eventually got him into 3D programs. After a while, he moved from creating art to actually building concepts and ideas. He says, “With the agency I owned, we were always making everyone else look like multi-million dollar companies, and I was like, “We could do that to ourselves.”

James still uses all of his illustration and designing skills to visualize and showcase his ideas. As an experienced entrepreneur, James is fully committed to working on leading-edge technology and eager to solve problems regarding how we humans interact and engage with each other in virtual and physical worlds. James has founded and led several technology companies in social networks, video streaming, mobile games, and creative services within the last two decades. He has also partnered with Sony Entertainment, Disney, MGM, FOX, Dreamworks, Microsoft, MTV, etc., through his past ventures.

His latest launch is a new form of VR, called Hyper-Reality, in the form of the multi-sensory entertainment company JUMP, which allows people to come as close to JUMPing and flying as the real thing, but without any of the added risks.

Providing Once in a Lifetime Experience

While many of us would love to experience the thrill and excitement of skydiving, it comes with its fair share of risk. However, with JUMP, what’s unattainable to 99% of the population can be achieved by the majority as it can provide once in a lifetime experience to a wide range of people because its simulator can fit a wide range of heights and weights. JUMP makes the nearly impossible possible. JUMP’s simulator provides an excellent activity for families, groups of friends, date nights, corporate groups, large parties, etc.

On 6th September, James announced that the world’s first location-based, hyperreal wingsuit simulation company, Jump, has entered into a partnership with Flow Research Collective and leading neuroscientists focused on this new era of experiential medicine. The primary investigator, Dr. Richard Huskey, will serve as the principal investigator and will lead a team of impressive researchers in an experiment studying the effects of the JUMP experience and its ability to put “jumpers” into a state of flow. The findings from this study could potentially unlock the next levels of human potential and other mental and physical health benefits.

JUMP challenges the limits of imagination and provides hyperreal, multi-sensory experiences (think BASE jumping off a cliff without the risk), helping people to reach a flow state and overcome fear. JUMP’s CEO James Jensen believes most psychological disorders are rooted in fear. Overcoming any fear – no matter how small – can be extremely empowering. If the first experiment is able to demonstrate that JUMP can induce a flow state, a future study will look at whether large “doses” of flow from JUMP could benefit a person’s physical and psychological state. JUMP seeks to encourage its guests to overcome the initial, gut-punch fear of jumping out of a plane and off of a cliff. This strongly aligns with the mission and methods of the Flow Research Collective. The entire research team will serve on the JUMP Advisory Team.

When asked why the team was looking forward to the results of the research Dr, Husky said, “Researchers have been studying flow since the 1970s. But we still have very little concrete understanding of flow’s causes or its long-term outcomes. The JUMP experience presents an opportunity to study flow in a unique way that we could never replicate in a traditional laboratory. This is why I’m so excited to partner with JUMP. Together, we’ll be able to conduct a study that helps us understand the causes of flow and how experiencing flow can lead to long-term wellbeing.”

Over the years, James has realized that it is always about the quality of time, not quantity. He believes one can get more things done in a short amount of time with 100% focus instead of working a long time with 10% focus. He feels burning the candle at both ends, and working 24/7 non-stop is not something one should brag about.

As the founder of the company, James believes his biggest failure professionally is not maintaining a controlling interest in his company’s vision. However, with time he realized the need to hire a CFO and attorney first to set up the organization’s foundation for success.

When it comes to success, he says, “Success to me means I’ve realized the full purpose of hyper-realistic virtual reality simulations. And collectively, we’ve reached our full potential and found our true selves.”

James and his team have recently started working with a research team to create the research side of JUMP. By studying JUMP’s effect on its clients, James and the team will learn more about several ways they may or may not be able to influence overcoming fears directly. Also, capturing JUMP sites provides the company with future licensing opportunities as it can sell its collected locations to several production companies.