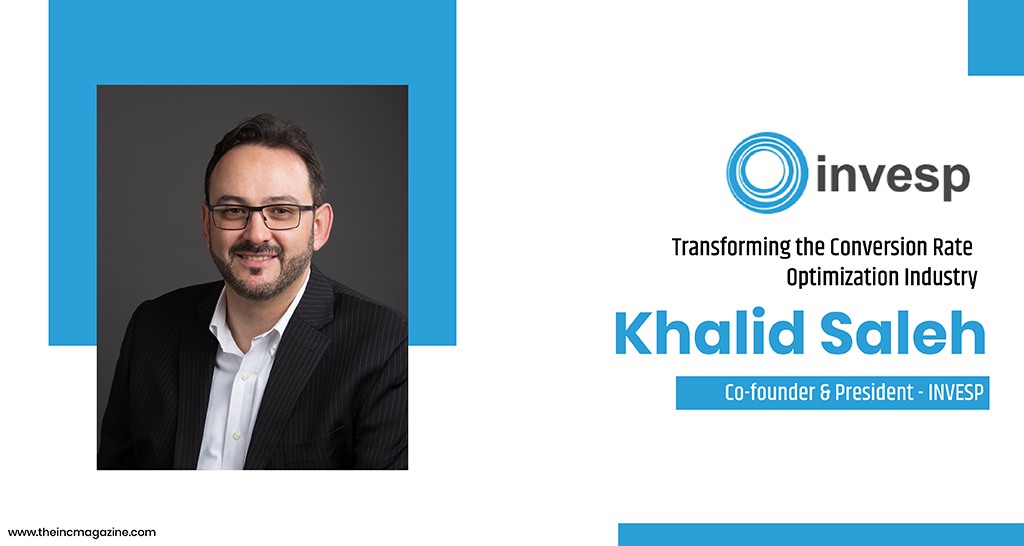 Khalid Saleh is the Co-founder and President of Invesp, an eCommerce conversation rate optimization firm. Founded in 2006, Invesp has worked with hundreds of companies ranging from well-established brands to fast-growing startups to increase their online revenue.

Back in 2005, Khalid was leading the largest e-commerce implementation for Motorola, a dream for any software architect. Although everyone was excited about working on this project, Khalid was worried that enough visitors wouldn’t visit the website, and it would hardly generate any revenue.

Still, after endless man-hours in the office and a price tag close to $50 million, Khalid and his team finally launched the website. Once launched, hundreds and thousands of visitors flocked to the website, which crashed 16 servers within a couple of hours. Although the development team managed to recover and bring back the servers, they noticed that even after so many visitors visited the website, only a handful of them placed orders. There was no money, and as a matter of fact, the website generated less than 10 orders during its first 30 days.

This incident helped Khalid understand what the future of the web would look like. No matter how much companies have invested in building websites, how many engineers they have hired, or how much money they have spent driving visitors to the website; if visitors do not convert, none of that matters. This eventually laid the founding stone of Invesp, one of North America’s first companies to focus on conversion optimization.

“The idea around the formation of Invesp was that we had seen that many companies were not paying attention to conversion optimization. Most companies were building websites and only focusing on SEO – but most of the traffic they were driving to their website was not converting. We wanted to help companies convert more and more visitors into buyers without increasing their traffic.”- stated Khalid.

When Khalid, alongside his partner, Ayat Shukairy, founded Invesp in 2006, there were only two other companies dedicated to CRO in North America. Invesp was one of the first two companies and remained one of the oldest CRO firms in the U.S. The firm’s services center around e-commerce Conversion Rate Optimization. Depending on the size and type of the company, Invesp offers services like;

Just like any other entrepreneur, the daily challenges that Khalid faces vary depending on the situation. As a leader, he faces three primary challenges: employee development, keeping everyone on the same page, and avoiding burnout.

The firm takes all the necessary and tedious steps to deliver results-oriented CRO programs that help its clients improve revenue and foster growth. It is committed to doing all the heavy lifting for its clients, and it will go above and beyond every day to prove it.

Khalid states, “Each and every quarter, we make it a point that we have company-wide meetings to talk about all things Invesp. These sessions also let us discuss our work and the team’s expectations.” The firm has also created a standardized process reflecting its mission and vision. Although Khalid understands that this process is not bulletproof, it is a good starting point to keep everyone aligned with Invesp’s values.

Although Invesp is regarded as the top CRO agency in the world, the firm still aims to be better as a team. “We want the word Invesp to be synonymous with CRO. We want people to think of Invesp whenever they hear the words CRO or conversion rate optimization. But all this can be achieved by ensuring that we create an environment conducive to employee growth and development. With a team made up of only rockstars, nothing is impossible.”- explains Khalid.