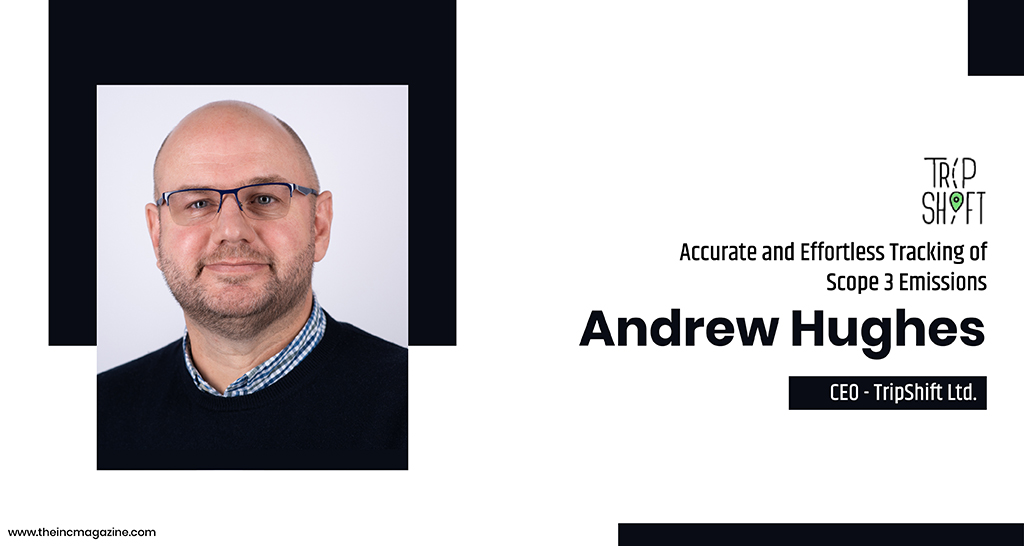 Led by its CEO, Andrew Hughes, TripShift aspires to become a carbon-neutral business and has been working towards it since the outset. The organization is presently working for accreditation as a B Corp, and as a part of that process, the firm has committed that it will consider its own impact on the environment as one of its key stakeholders and will be considered in every decision it makes as a business.

Globally businesses are now expected to track, reduce, and report their scope 3 emissions, and in several cases, it is becoming the norm. In the EU, UK, or the US, Climate Financial Disclosures are either a legal requirement or the required legislation is being prepared and soon be enacted.

“This legislation will inevitably, at some point, be linked to taxation or some other financial levy, depending on the jurisdiction.”- says Andrew.

With global transport emissions representing around 25% of total carbon emissions, we urgently need to decarbonize our transport systems, and to do that, we all need to move better.

“A narrative has emerged that says that the only way to make a real impact on climate change is to stop traveling, particularly flying, whether it be for leisure or business.”- he adds.

Andrew strongly believes that transport and aviation are enormous social and economic enablers. “As humans, we need to continue to be able to move, but we must all start to move better, and if we all start to make small changes to our travel habits, then it can very quickly add up to a much greater impact.”- he stated.

Andrew believes the accurate measure of success will be the millions of tonnes of carbon that TripShift will record and remove from the environment. If TripShift can manage this, then the start-up will have a more significant impact than any amount of management KPIs or shareholder dividends could provide, mainly because of the firm’s contributions toward a better global environment for the generations ahead.

On the other hand, Andrew’s final measure of success would be the team of TripShift. As a start-up CEO, Andrew does not conform to the current stereotypical view of tech start-up CEOs. He believes in the diversity of thoughts and doesn’t want to fit in with those stereotypes, but he looks forward to seeing his start-up firmly on track to recruit his replacement, who can take over the responsibility of TripShift’s development.

“Open-minded about who or what that person might look like, but I would love it if one of the existing team or our recruits in the near future take up the challenge. Even better if our culture, training, and support has given them the skills to step up and even better if they don’t necessarily look or behave how the stereotype of the time is perhaps expected to behave.”- Andrew explains.

Since its foundation in 2020, TripShift’s guiding principle is to talk the talk and walk the walk. In simpler terms, it must do precisely what it would persuade its clients to do. On a fundamental level, the start-up needs to be carbon neutral with a clear path to becoming carbon positive; it can’t afford to compromise its product by any connection or concern of potential greenwash issues.

“To that end, we will only work with professional partners who operate to the same standards and level of ethics as our own, data should always be verifiable or auditable, and its presentation conforms to the highest or gold standard.”– explains Andrew.

TripShift also seeks to be an active participant in the debates around global standards for climate emissions. Andrew feels this is an area of genuine concern and needs to move much beyond just an accounting challenge if it needs to develop the required credibility.

“Financial risk disclosure is important, but the debate must spread beyond just the processing or commoditization of carbon credits and engender real change in the form of actual reductions rather than just financial offset.”– he added.

On the other hand, TripShift is ready to become a B Corp by adhering and operating to the highest ethical, social, and sustainability standards, where the environment and clients are considered stakeholders.

The start-up recognized the need to dramatically reduce carbon emissions as a global issue, and from the start, it configured TripShift to work globally. It believes that people need to move better to help the world meet its NetZero requirements in order to sustain our environment for the generations ahead.

As the leader of the start-up, Andrew believes that the TripShift platform is now tested and proven, so for the team, the next few years will be about growth.

He says, “We are currently leading the field when it comes to door-to-door or last mile solutions; combine that with the dashboard data, and we have the potential to bring real value to businesses who are looking quickly and efficiently track, reduce and report their scope 3 commute/business travel emissions.”

Andrew and his team see TripShift as a platform to set global standards and become a world leader in this crucial battle to combat climate change.