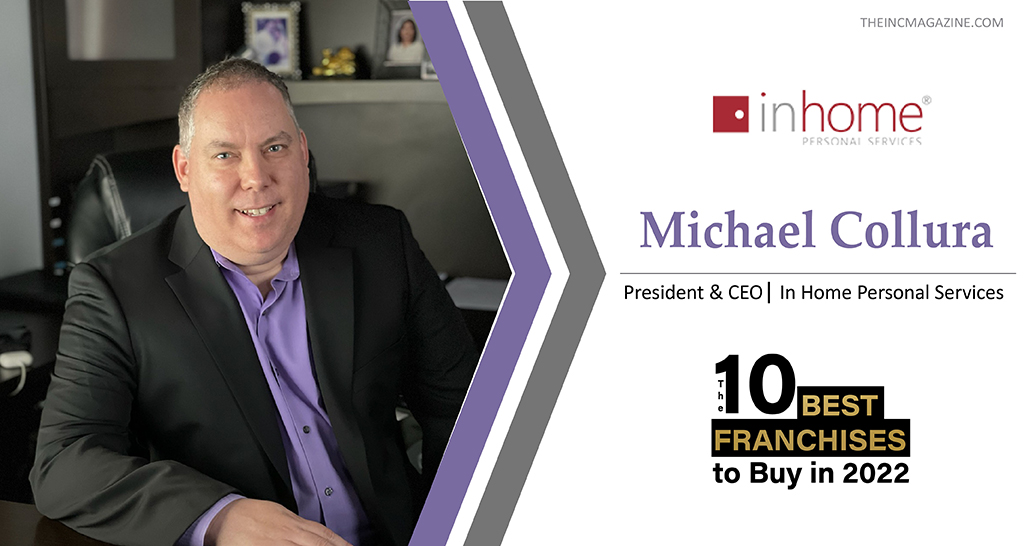 With the intent of doing something that mattered Michael A Collura, founded, In Home Personal Services. Michael started his journey in senior care quite early. At the age of 15 unknowingly he was on a path that would eventually change his and others’ lives forever. He began working in his first job along with his mother in a nursing home. There he instantly developed a passion for doing something that mattered and being someone who would help others.

Michael started the business in 2004. By 2009 IHPS was growing at a rapid pace and wanted to share the success with others. He knew that doing so through franchising was IHPS’ best option. So, in 2009 the organization started the development of the system. After awarding the first few units IHPS decided to shut down the Discover processes entirely and focus on the perfection of the system.

Michael says, “We put in nearly a full decade behind the study, review, and work behind what the model is today. We set out to ask ourselves if we could make a wish as an entrepreneur and truly build the system better how would that look.”

The initial whiteboard project became a team’s decade-long pursuit and today, IHPS has done it. Because it has developed so many differentiators and advantages in the system today that within the industry IHPS is a clear choice and stands out when compared alongside anyone else.

As the founder of the organization, Michael still heads the innovation behind the brand and sees the contribution made and his part in the development of the brand as one of leadership. Michael Collura has a unique and refreshing view of his role within the brand. His role is one of support and development of the team, not himself. He sees his main role to lift, support, and build the team. They will carry the mission and the brand forward.

In Home Personal Services is a non-medical senior care provider. The organization ensures comfort, compassion, and quality care in the home to those who need that assistance for an independent lifestyle. The organization delivers the care understanding the needs of those that seek IHPS out in order to truly understand what makes it quality and compassionate care.

Michael says, “Leadership. Integrity and Trust. Values that are all too often cheapened away sold off or dismissed for the pursuit of success.” IHPS doesn’t compromise on values. Additionally, the organization listens to its critics and welcomes any suggestions from them.

When the Pandemic Came

According to Michael, “Nothing about the pandemic has any real good. I know, we had “heroes” in the healthcare field. I have called our frontlines heroes. But in truth, they already were.”

The pandemic only opened the eyes of those who took healthcare professionals for granted. These healthcare workers and caregivers don’t give up. They won’t quit and, in IHPS, Michael is proud to say that his team never wavered in the face of the uncertainty, fear, and confusion even during the early days of this terrible period. Now Michael and his organization hope it does create real change in equality and access to care as well as gratitude towards those that serviced those frontlines.

Also, the organization needs more quality caregivers, which has always been its most sought-after resource. These caregiver professionals are in high demand today and in short supply. IHPS’ solution was one of innovation. It has built, and improved upon in the past several years, its very own school for caregivers. Today it stands as a first-of-its-kind offering caregiver certification for all 50 states. It has become one of the major differentiators for IHPS and will be a brand advantage for years to come.

An Innovative and Forward-Thinking Brand

Michael was most impressed by the entrepreneur and the individuals’ desire to take control of their own life and livelihood. Team IHPS believes franchising is the perfect vehicle for all the success and life’s journey you have been searching for. So, the organization has built the system for the true entrepreneur, not someone looking to purchase their next job. IHPS’ system is built with all the same flexibility as its service care model and once again shows it was able to achieve is a brand that was truly innovative and forward-thinking.

When it comes to motivating employees, Michael believes, there is a lot that leadership can and will do to motivate the team. However, in this industry, where IHPS is operating if a person is not already motivated to provide care to others, then he/she won’t be able to be a part of the IHPS brand. Because that is the fundamental core and heart of IHPS’s mission. The organization can’t motivate people to be good to each other or care to help others.

As the founder of IHPS, Michael is proud of all the achievements of the organization. His goals today are to work to grow the system in order to expand the impact it makes in the lives of others. Not driven by him but driven by all those around him and all those that will join IHPS in these coming years.

Facebook, the billion dollar idea and Conspiracies behind it?