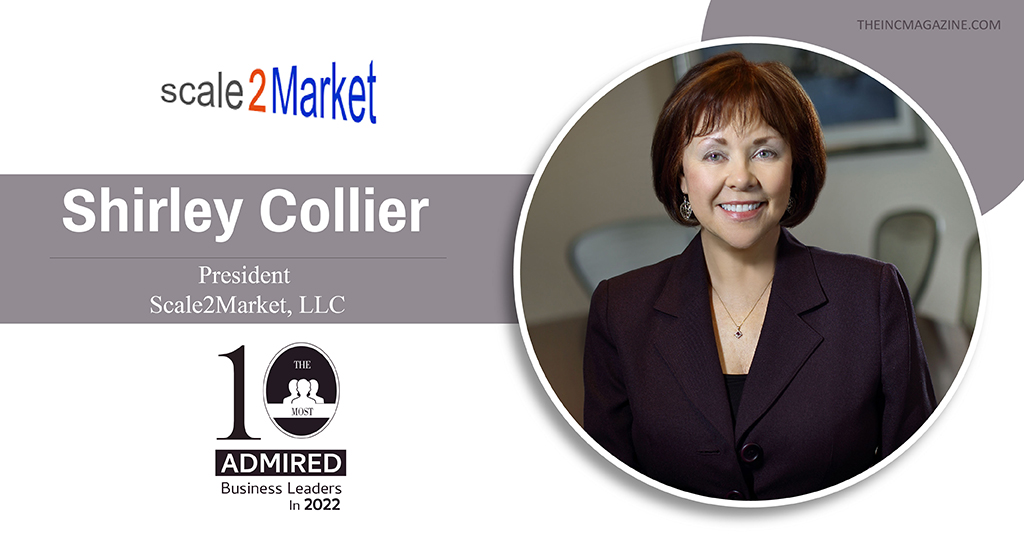 Meet Shirley Collier, President of Scale2Market, a serial tech entrepreneur turned government contracting management consultant who grew up as the oldest of 5 girls in a large southern family. After receiving her Master of Science degree in Management from Louisiana State University, Shirley moved to Maryland to work for a large regional bank. However, after 4 years, she launched the first of the six companies she would start and grow over the ensuing years.

After selling her previous businesses, Shirley Collier founded Scale2Market to help other business owners understand how to grow and prosper in the complex, highly regulated federal marketplace. Shirley, along with her team, dives deep into their clients’ current business models, past performance, core competencies, relationships, and revenue goals then conducts market research to determine which agencies have and will buy their clients’ products and services. This process has been synthesized into a proprietary D.A.V.I.E. Growth Framework. The team discusses strategies with clients for competitively positioning their businesses in the complex market and transforming their organizations to win new, profitable federal contracts.

Shirley’s father was a small business owner who encouraged her to spread her entrepreneurial wings, not just work for others. However, her mother encouraged her to work for a large company with job security and good benefits. But it was the lack of career opportunities for women in major corporations at that time that encouraged Shirley to start her first business.

As a business leader, Shirley Collier is driven by her value system: equity, honesty, altruism, and perseverance. She has served in leadership positions on various for-profit and not-for-profit boards, including F.C.N.B. bank, the International Alliance of Technology Integrators, the Howard County Chamber of Commerce, the Domestic Violence Center of Howard County, the Howard County Economic Development Authority, U.M.B.C.’s Center for Women in I.T. and the Horizon Foundation. Shirley is passionate about the advancement of women in S.T.E.M. disciplines. She founded Computer Mania for middle school girls, a 1-day festival celebrating women in technology driven fields that was held for 18 years.

She says it is an extraordinarily challenging marketplace with various seemingly conflicting procurement objectives. One objective is finding the best quality products and services for the lowest price. The other is buying from small, disadvantaged businesses. Multiple complex federal rules, policies, and regulations govern these objectives. Government employees and government contractors alike often misunderstand the rules. As a result, there is not as much competition in procurements as the federal government would like, which results in a lack of innovation and higher prices.

As the founder of Scale2Market, Shirley is motivated by her desire to serve the American people by helping small businesses provide the much-needed innovation, ingenuity and flexibility federal agencies are seeking from the vendor community.

This desire is conveyed to her employees. Shirley motivates her team by providing them latitude to constantly improve how they work, serve clients, and celebrate and encourage each other. The company has a peer recognition program called the Giraffe Award that commends employees who “stick their necks out” and go above and beyond the call of duty.

Over the years, Shirley has been recognized for her contributions to her profession and the community. She was awarded the Woman of the Year award by the Business Women’s Network of Howard County and received the E.B.O. Outstanding Woman in Business Award. She was named as one of Maryland’s Top 100 Women three times and inducted into their Circle of Excellence. She was also named one of the Arthritis Foundation’s Women of Distinction.

Both Shirley Collier and her company were awarded the Torch Award for ethical business practices by the Better Business Bureau of Greater Baltimore.