No Result
View All Result
Home Women in Business 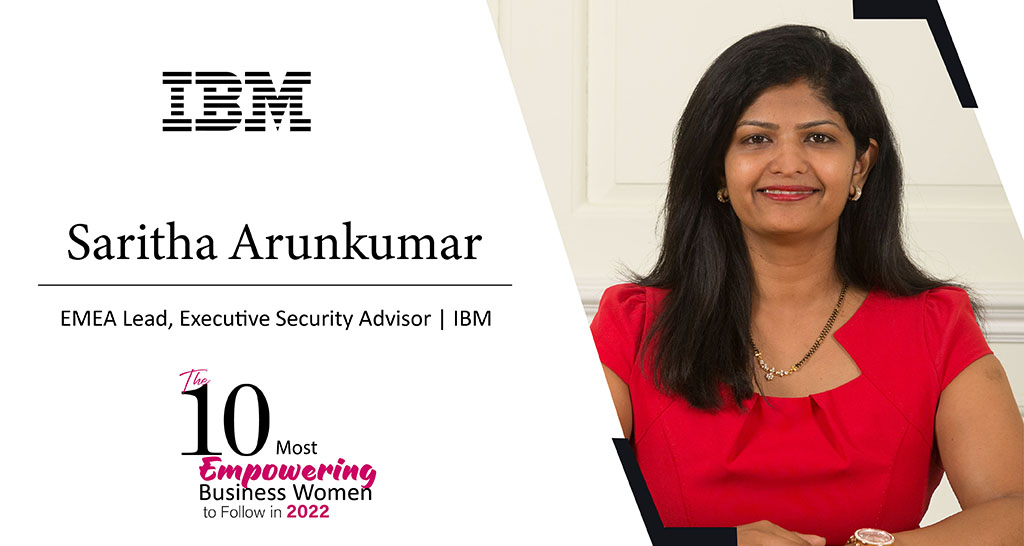 Meet Dr. Saritha Arunkumar, the EMEA Lead, Executive Security Advisor at IBM Security X-Force Cyber Range. Dr. Saritha is a thought leader with over two decades of experience in the Cyber-Security space, leading and shaping up security in upcoming and emerging areas, including Biometrics, IoT Security, IAM, Blockchain, and Decentralized Identity. Building upon her deep technical expertise in security design, solutions, governance, and architecture, she has become an expert and trusted client advisor across several industries and account teams in emerging solutions for Decentralized Identity, IoT Security, Blockchain, Biometrics, and IAM.

Dr. Saritha was a key contributor to the Biometrics Standards body SC37 and is a fellow of the British Computer Society. She is also an IBM Master Inventor, fostering and nurturing new inventors by guiding and mentoring them through several programs, leading the overall growth of IBM’s patents. Over the years, Dr. Saritha has been recognized as the Winner of Top 100 Asian Stars in UK Tech 2018, Winner of TechWomen 50 2017, Runner Up of Women of the Future 2013, and Outstanding Innovation Award winner 2017 at IBM.

Dr. Saritha’s journey started in a computer lab in India. At the age of 10, she spent several hours in her school’s computer lab, where one of her favorite teachers led classes. The teacher initially showed her how she could create games and pictures with only a few lines of code. At first, Saritha couldn’t believe it. However, her teacher then showed her how to write code, and she was hooked. Soon she went even deeper and learned about COBOL, Pascal, and other primary computer languages.

She says, “For pre-university, I specialized in computing. I dove deeper into the inner workings of a computer, learning about software and hardware. I took computer classes during my free time during my engineering years.”

After graduation, Dr, Saritha enrolled in a master’s program for operations research and joined one of the largest public sector companies in India, working as a security engineer. Initially, her role was outside the scope of her studies, as it focused on cryptography. The company also assigned Dr. Saritha a critical project, which reputed government agencies would use. So, she dived deeper, following the teachings of her manager. Although the role was quite stressful, she enjoyed learning public key cryptography and symmetric and asymmetric encryption.

Dr. Saritha joined IBM in 2003, where she got the opportunity to work on several projects in a number of roles, including security specialist, security architect, security technical sales, senior and lead security architect, executive security advisor, and thought leader. Through these roles, she worked on technologies like identity, access, federation, single sign-on, Mobile Security, Biometrics, Blockchain Decentralized identity, and cyber security.

Later in 2020, Dr. Saritha moved to IBM Security X-Force Cyber Range, which offers simulated breach experiences for clients across the spectrum of roles. It also aims to help C-Suite leaders, the Board of Directors, and technical teams understand the risks of a cyber attack and identify and fix gaps in their response controls and processes.

Dr. Saritha feels her most significant achievement was getting her Ph.D. in Mobile Security. She says, “My father had always dreamed of his daughter having the letters “Ph.D.” next to her name. To help him fulfill that dream, I enrolled in a Ph.D. program in mobile security at the City, University of London, and completed my Ph.D. in 2016.”

Being a key person at IBM, Dr. Saritha is fully prepared for challenges. Throughout her career, she has constantly been challenged with new technologies; at first, it was mobile security, then biometrics, followed by Blockchain and Decentralized Identity. She also feels every client is different, and the requirements are different. So, every project is a new challenge for her, and she likes it as it allows her to learn and improve every day.

“I wouldn’t call it the biggest failure but something that I would have done differently. I wish I had started innovating much earlier than I did.”– Says Dr. Saritha.

She started patenting back in 2014 and has been a Master Inventor since 2016. Dr. Saritha spends a lot of time working on several patent jams and programs triggering innovation. She is very passionate about innovation and tries her best to educate and motivate every newcomer and get them on to the patenting community.

Connecting FEMALE ENTREPRENEURS With Right Investors For Their Business