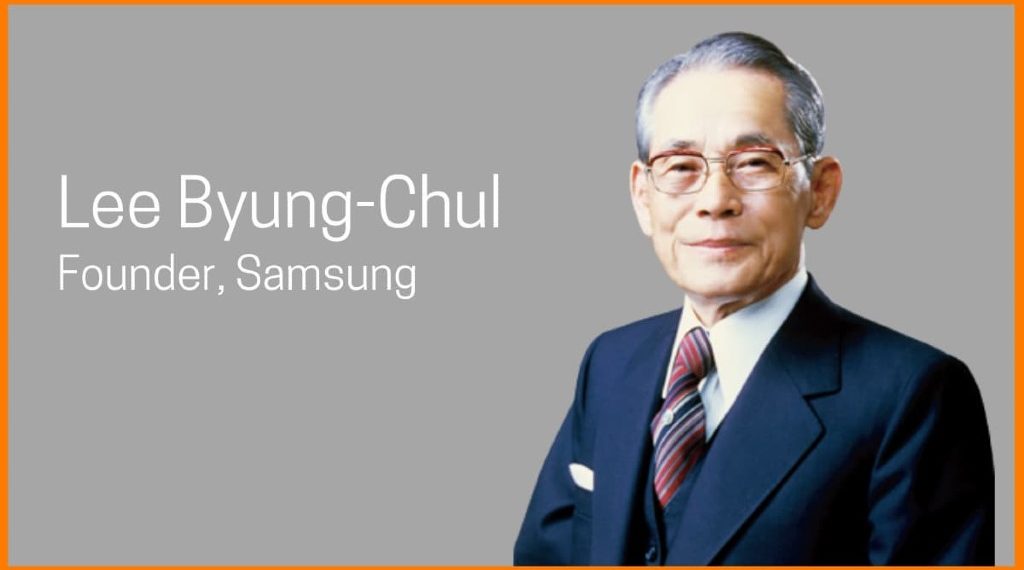 The name “Samsung” means “three stars,” with the number three standing for “something powerful.” As its name sounds, Samsung has grown from a small company to one of the largest conglomerates in the world.

The company’s first logo consisted of three stars and was based on a graphical depiction of the Korean Hanja word Samsung. Inspired by Mitsubishi, Byung-chul established a family-centered (chaebol) management structure for the corporation. Samsung acted in much the same way as a typical Japanese corporation, with executives who did what they were told without question. Samsung grew swiftly as a result of this business behavior, which was aided by government assistance. The firm expanded into sugar refining, media, textiles, and insurance, and was hailed as an economic miracle. In 1987, Byung-third chul’s son Lee Kun-hee replaced him after a family feud over inheritance. Kun-hee moved Samsung from a manufacturing to a worldwide technological powerhouse by substantially investing in semiconductor technologies. He was hospitalised in 2014 after suffering a heart attack that put him in a coma. And since, his son Lee Jae-yong, who is considered more laid-back than his predecessors, has functioned as the company’s de facto leader.

More on the details of building a conglomerate

Lee Byung-chul founded Samsung as a commerce enterprise in the city of Taegu in 1938 with only 30,000 won. Samsung began as a food business with 40 workers, trading and exporting items made in and around the city. It marketed Korean dried fish and veggies, and its own noodle products.So when the Korean War broke out in 1950, the firm prospered and extended to Seoul. Right after the war, Lee established a sugar factory in Busan before diversifying into textiles and constructing Korea’s largest woolen mill at the time.

Samsung’s early diversification proved to be a successful development strategy, as the company quickly ventured into the insurance, securities, and retail sectors. Well after the war, Samsung concentrated on Korea’s rehabilitation, particularly industrialisation.

Samsung began the electronics business in the 1960s by establishing numerous electronics-focused divisions:

Samsung-Sanyo began producing black-and-white televisions in 1970, and then expanded into shipbuilding, petrochemicals, and aviation engines. Samsung went on to make transistor black and white TVs, colour TVs, refrigerators, electric desk calculators, and air conditioners during the next decade. The firm attained the milestone of producing 5 million televisions in 1978.

Samsung Heavy Industries was one of the world’s largest shipbuilders by 1974. Samsung Electronics America and the Suwon R&D Center were created in the late 1970s.

With the acquisition of Hanguk Jeonja Tongsin in 1980, Samsung joined the telecoms hardware market. Samsung began with producing telephone switchboards, then moved on to telephone and fax systems, and finally to mobile phone manufacture.

Samsung expanded into Germany, Portugal, and New York in the early 1980s. Samsung Printing Solutions was started in 1982. This company’s subsidiary provided printing companies with digital solutions. The business began producing personal computers the following year, and by 1984, Samsung’s sales had surpassed one trillion won.

Samsung extended to Tokyo and Great Britain later in the decade, establishing itself as a semiconductor manufacturing leader with a large output of 256K DRAM.

Lee Byung-chul, the company’s founder, died in 1987, and his child, Lee Kun-hee, took over as CEO. Samsung Semiconductor and Telecommunications merged with Samsung Electronics not long after. Home appliances, telecommunications, and semiconductors were the emphasis of the united company.

The next ten years saw much more progress and accomplishments. Samsung quickly rose to the top of the semiconductor industry, founded Samsung Motors, and began making digital televisions. In addition, the corporation began substantially investing in the development and installation of equipment for other businesses. It aimed to become the largest consumer electronics producer in the world.

Samsung Ventures was established in 1999 with the goal of investing in startups that would focus on several of Samsung’s main offerings.

The Massive Entry into Mobile-Phone Era:

The SPH-1300, an earlier touch-screen model unveiled in 2001, was Samsung’s first foray into the phone business. In 2005, the business also created the first speech-recognition phone.

Samsung bought firms that created technology for electronic devices in the late 2000s and early 2010s. Samsung debuted the Galaxy S II in 2011, followed by the Galaxy S III in 2012, which is one of the country’s most popular smartphones. Samsung also became the worlds largest largest mobile phone manufacturer in 2012, and it acquired mSpot to give amusement to Samsung device consumers.

In the years afterwards, the firm has made several acquisitions, including businesses that will help it grow its services in medical advances, smart TVs, OLED displays, connected home, workflow management system, cloud solutions, payment solutions, and artificial intelligence.

Samsung launched the Gear VR in September 2014, a virtual reality gadget designed to work with the Galaxy Note 4. Samsung had much more U.S. patents issued than any other corporation before the end of 2015, with over 7,500 utility patents awarded before the year’s conclusion.

Samsung received official approval to test a self-driving car in 2017. Samsung said the next year that it will increase its renewable energy initiatives and add 40,000 workers over the next three years.

The story of frenemies:

Samsung and Apple have a symbiotic connection. In 1983, Steve Jobs went to Samsung in search of screens and memory chips for a tablet computer. Following that, Samsung provide Apple with screens, CPUs, and other components, which were utilized in products like the iPhone and iPad. However, in 2011, a patent war erupted. Apple alleged that Samsung cloned the iPhone, resulting in a long-running series of litigation that were ultimately settled in 2018, with Apple receiving a US$539 million settlement. The two firms’ problems continue, and they are now best defined as “frenemies.”