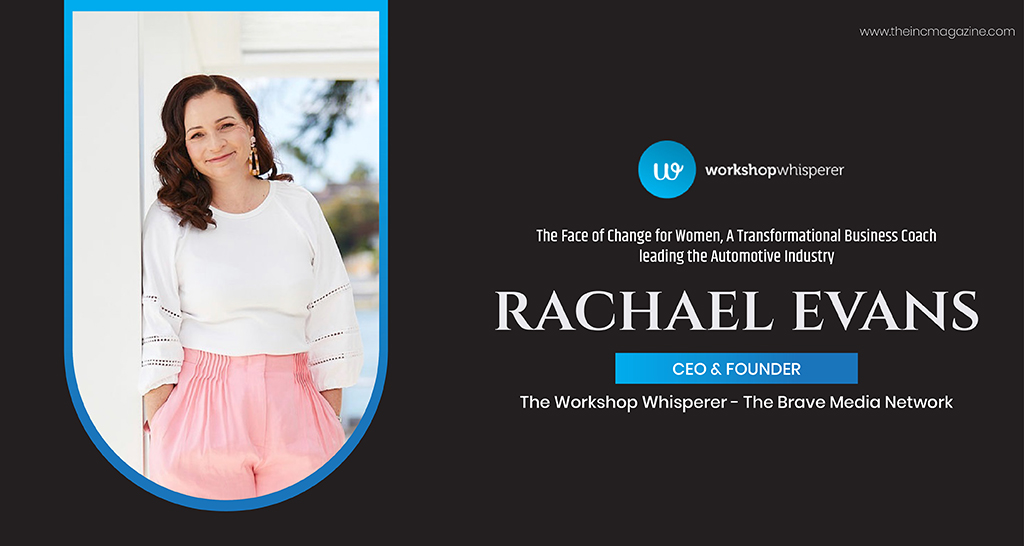 Rachael Evans: The Face of Change for Women, A Transformational Business Coach leading the Automotive Industry

Rachael Evans is a visionary, business pioneer, speaker, author, and advisor, who is making waves across the globe. She is the CEO and Founder of The Workshop Whisperer and The Brave Media Network.

Rachael is a 45-year-old entrepreneur and leader, mother of three biological and three stepchildren, wife to her darling husband Dean, and a proud Australian.

She started her first business when he was 18, selling party plan cosmetics. Ever since there has been no looking back and she has gone on to own and operate another five businesses.

Now, she is a proud owner of The Workshop Whisperer, a business coaching specific to the auto repair industry. Additionally, she also works with seven and eight-figure female entrepreneurs to find more harmony in their lives through her advisory Brave Media Network.

A learner and an avid reader, Rachael expresses her love for books. Bitten by the learning and reading bug, she has a trail of books all through her house open at various pages waiting for her to stop by and read another one.

“I love going on adventures with my husband to explore new places, and I also love my quiet time as I’m an introvert at heart,” adds Rachael.

Founded in 2014, The Workshop Whisperer is the #1 business coach for auto-repair shop owners in Australia, and New Zealand. She offers a range of different online programs and intensives for all stages/scales of auto shop businesses.

Founded in 2021, The Brave Media Network is a newer entity offering women a way to be seen, felt, heard, and mentored by Rachael to have the greatest impact possible.

The purpose of The Workshop Whisperer is to help auto repair shop owners to achieve business and lifestyle success.

From Rachael’s desk- “So for us, it’s very much about how many businesses we get to help transform, and how many lives we get to help change for the better. When you focus on helping others in this way, wealth will naturally find its way to you to do better with. We make sure we contribute a portion of the fees our clients invest in us to make an even more positive impact in the world through B1G1.com.”

The Brave Media Network includes a podcast and an advisory for women looking for personal and professional fulfillment.

Rachael wanted to redefine bravery in male-dominated global industries, carving out pathways and opening doors for scores of women to walk through and stand beside her.

In March of 2021, she was appalled when she noticed that among the Governor General Australian Bravery award recipients, 80 of 86 were presented to men for acts of physical valor or service. While these acts are indeed brave, she believed bravery means so much more than this, and by including other definitions of bravery away from just the physical, one can be more inclusive of the brave acts of women.

The key attributes of Brave Media Network explore and work on this concept. Opening up a discussion about the other forms of bravery like moral, emotional, and spiritual bravery is what the company is aiming for.

Both of Rachael’s companies exist to serve others. She is not just a businesswoman but a purpose-driven leader, a humanitarian, and a passionate being about bringing change to the community.

A Take on Working with Male Contemporaries

Rachael is a women entrepreneur with decades of extensive experience. In her long-standing career, she has worked, managed, and led her male counterparts. When asked if she faced any resistance and how she handles working with men, Rachael responded, “I’ve been quite fortunate in that most of the men I’ve encountered during my time as a coach and mentor have been quite open to receiving help and being led by me.”

Of course, there have been the occasional exceptions, where male egos and their self-sabotage got in the way of a great result, however, on the whole, she always had a positive experience.

Also, Rachael has always stood her ground and had strong boundaries and let the boys know, she is the best in the world at what she does and they should take notice. She has done that from the start and she believes that’s earned her respect in the industry, and has driven many to seek out her help.

The Art of Work-Life Balance

Being recently re-married with a blended family, getting the balance, and harmony right between work and life is important to Rachael and her husband.

She has been working a 4 Day Work Week since 2016, and that has helped hundreds of clients transition their businesses to 4DWW too. She also makes sure that work is planned around life rather than the other way around.

It is a mix of “Think Weeks” and vacation weeks throughout the year. “This ensures that we are as fresh as possible, and to make sure we are ready and open to innovate,” adds Rachael.

Both The Workshop Whisperer and Brave Media Network operate from Vivid Visions – a concept of Cameron Herald’s – meaning company aspirations are planned out three years at a time from a big-picture perspective.

Being her visionary self, Rachael fondly expressed how she spends a fair amount of time daydreaming about what the future looks like, so it only becomes a matter of reverse engineering the steps of what she can see to achieve the big goals of both companies.

The Workshop Whisperer is on track to not only be the largest education provider of choice for the Automotive Industry but will also make its mark in helping auto repair shop owners to leave a greener footprint as they go through the course of their working day.

Auto Repair shops are the end users of some of the world’s most polluting products like oil and rubber, and as a company, it helps educate its clients to seek out more environmentally friendly disposal options and contribute back to their communities through giving projects like B1G1.

On the contrary, Brave Media Network will reach a billion women by 2024 to help provide a new more empowering definition of what it means to be brave through their social media platforms and The Very Brave Podcast.

A Piece of Incredible Advice

“Life is way too short NOT to stand in your power and put into action what you can see in your mind. No one else’s rules should get in the way of you becoming the best and most successful version of yourself. Be brave and do it your way.”