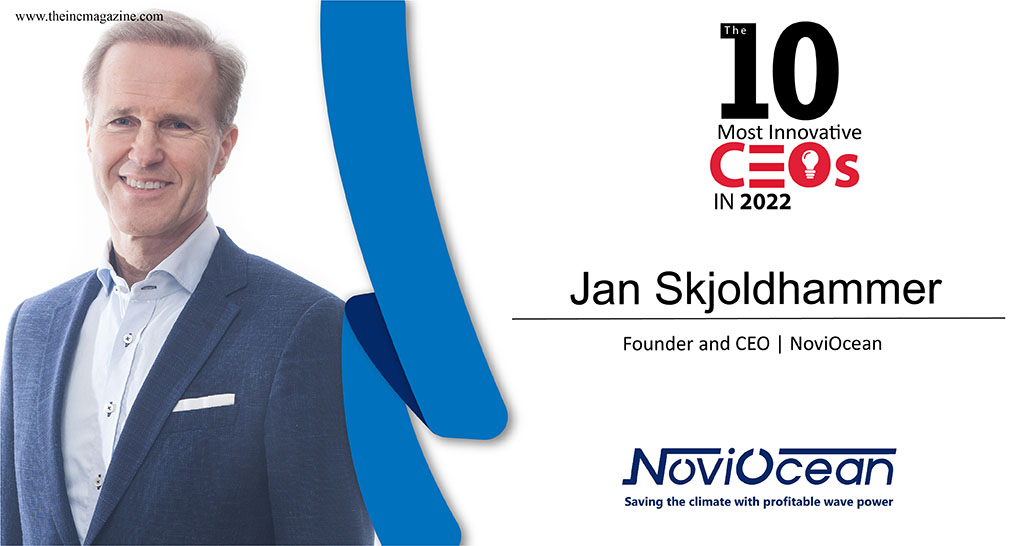 Our company, Novige AB, is a Swedish cleantech startup which is behind the development of NoviOcean wave energy converter (WEC), our solution to finally making wave energy profitable and accessible to all.

To make this ambitious dream into a reality, in 2011, I left my well-paying job as an airline captain/pilot and focused all my energy and a larger part of my life’s savings into working on the idea that would satisfy my stringent criteria. I wanted the solution to be cheap, simple and light-weighted relative the output, and work with a few but well-proven components. Hence, Novige AB and its solution, NoviOcean, were born in 2016.

Our mission is “saving the climate with profitable wave power”. To achieve this, I have employed like-minded professionals who passionately believe in our cause. Our team has achieved several awards and recognitions such as Guldstänk’s Innovator of the Year 2020, Mission Innovation Champion 2020, Stena Line’s Propeller Prize 2021, and EU’s Seal of Excellence as an indication of the growing trust in what we do!

Explained in simple terms, in every wave, the vertical motion of a rectangular floating structure creates enormous lifting forces (for example 600 tons for a 3.5-meter wave). This force is then hydraulically transferred from our cylinder and piston/piston rod connected to the sea floor, to a fast-spinning and highly efficient Pelton turbine-and generator assembly which generates the electricity, which is then transferred through subsea cables to the electricity network.

Despite ocean energy’s enormous potential, previous technologies have so far not been very successful in delivering cost-effective solutions to the market. There are many complex systems that generate relatively low amounts of electricity compared to their mass and many moving parts. Such designs will ultimately lead to high and unattractive costs.

NoviOcean, on the other hand, uses simple, light-weighted, and well-proven parts allowing for a reliable and stable electricity output which leads to a lower cost of electricity. As an example, we can achieve a lower cost than a similar-sized offshore wind farm after 50 MW of NoviOcean deployment.

As we all know, the share of renewables must be substantially increased globally at an ambitiously high rate for us to be able to reduce our negative footprint on the climate. However, grids are already unstable with intermittency issues and increasing the present renewable share (mainly solar and wind) to meet the increasing demand would result in even more intermittency. To balance this effect, one might think of any of the following solutions:

Chemical batteries have so far introduced an array of sustainability issues for their mining, construction, and disposal. It is also important to remember that batteries only store energy, not produce it.

Even though such generators have fast response for balancing the grids, it is still not a suitable solution as the global initiative is to move away from using fossil fuels as soon as possible, not to stay dependent on them.

Wave energy is the largest untapped renewable energy resource on the planet. Due to being off-phased with wind, wave energy is inherently more stable than wind and solar since the waves persist for many days even after the wind stops blowing. Therefore, it can effectively lead to higher baseload supply (3x more than wind and 4-5x more when combined with wind) which helps mitigating the need for fossil-based energy during peak hours.

Higher stability also leads to a reduced need for unsustainable batteries and mining of rare-Earth metals while producing extra electricity with the same amount of investment. Unlike previously explained solutions, wave power installations do not occupy precious land area while due to the high kinetic energy contained in waves, less sea area is needed (compared to offshore wind).

Moreover, wave energy is significantly less geographically constrained. With oceans covering more than two-thirds of our planet’s surface and because of wave energy’s enormous potential of more than the current global electricity production, wave energy can be the perfect addition to the future sustainable energy system for all.

Our solution can be easily adjusted to have the optimal power performance based on resource availability of the deployment site which unlocks a unique opportunity to locally manufacture, deploy, and operate our units using the available resources and knowledge base. Therefore, as one of our key strategies for future rapid expansion, we will be offering large-scale licensing to shipyards and industrial companies around the globe to build and operate our NoviOcean units. This can ultimately empower the local/regional economy and job market.

Moreover, we are open for dialogues for partnership opportunities with large industrial companies with global networks who would like to join us in this journey, with a risk-reward ratio most companies would seldom come across.

So far, our 1:5 scale NoviOcean prototype has been tested and validated in both wave tanks and real offshore environments (see picture). The results of these tests are now being directly used to design and construct the first full-scale NoviOcean pilot unit, rated at 500-kW. We have already received a 2.1 MEUR grant support from the European Commission (under CINEA LIFE programme) to cover about 45% of the costs associated with the design, construction, and demonstration of this full-scale pilot by 2025.

I warmly invite you to read more about our team, our journey, and our future plans for “saving the climate with profitable wave power”. We would also welcome you to contact us if you are interested in discussing partnerships and/or possible investment opportunities.