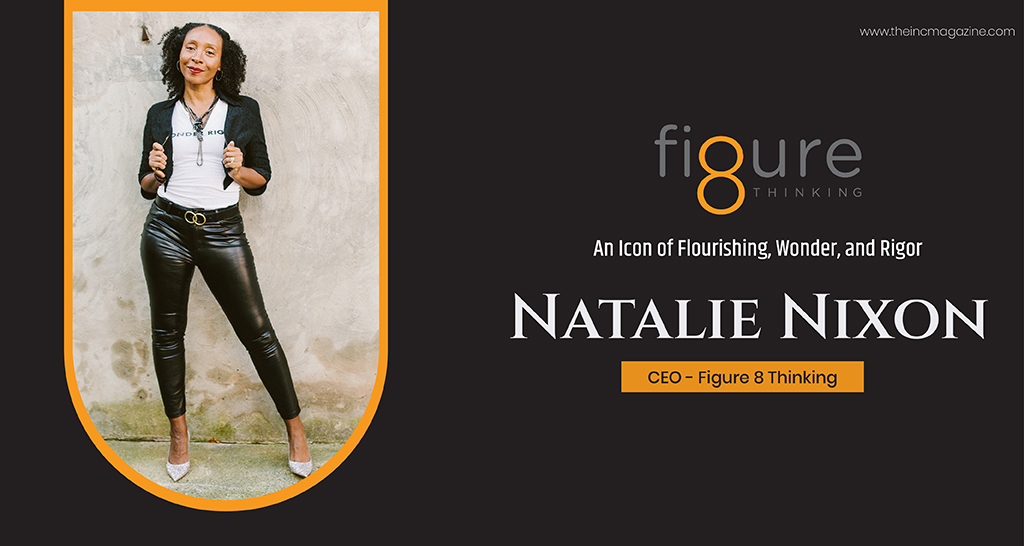 Natalie Nixon: An Icon of Flourishing, Wonder, and Rigor

A strategist and innovator, Natalie Nixon is “the creativity whisperer to the C-Suite”. As CEO of Figure 8 Thinking, she is a creativity strategist, global keynote speaker, and author of the award-winning The Creativity Leap: Unleash Curiosity, Improvisation, and Intuition at Work, which has been recognized as a game-changing innovation book by Fast Company, Porchlight and Soundview.

At Figure 8 Thinking, LLC she advises leaders on transformation- by applying wonder and rigor to amplify growth and business value. She works with leading giants around the globe including Google, Meta, Morrison Foerster, Citrix, Microsoft, VaynerMedia, and Bloomberg.

Natalie has been named among the top 50 keynote speakers in the world by Real Leaders; is a 3-time TEDx speaker; and has been featured in Forbes, Fast Company, and INC. Figure 8 Thinking, was named among the top women-led innovation firms by Core 77. Marketing guru Seth Godin has said that Natalie “helps you get unstuck and unlock the work you were born to do!”; and Jessi Hempel, host of LinkedIn’s “Hello Monday” podcast called Natalie “a personal trainer for your creativity muscle”.

A Timeline of Natalie’s Career and Education

A hybrid thinker, Natalie consistently applies her background in cultural anthropology and fashion. She began her career in education and as a hat designer. Later, Natalie worked in global apparel sourcing for a division of The Limited, Inc. Previous to Figure 8 Thinking, she was a professor for 16 years. Natalie is an early-stage investor in three social impact ventures. She’s valued for her ability to work at the intersection of commercial value and stakeholder equity.

Natalie has lived in Germany, Brazil, Portugal, Israel, and Sri Lanka and is proficient in Portuguese and Spanish. She is certified as a Foresight Practitioner by the Institute for the Future.

When she’s not dancing up a storm in hip-hop class, Natalie is fine-tuning her rumba, salsa, and hustle on the ballroom floor. She lives in her hometown of Philadelphia, Pennsylvania, with her husband, John Nixon, and is the proud stepmother of Sydney.

She received her BA (honors) from Vassar College and her Ph.D. from the University of Westminster in London. Learn more at figure8thinking.com and follow her @natwnixon.

The Birth of Figure 8 Thinking

Natalie was motivated to build Figure 8 Thinking after starting it as a side hustle while she was still an associate professor and founding director of the Strategic Design MBA at Thomas Jefferson University. After giving a 2014 TEDx Philadelphia talk in which she proclaimed that “the future of work is jazz” she was invited to many companies to speak, facilitate and advise ways to help them become more improvisational organizations. This sparked the formation of Figure 8 Thinking. Two years later, she was having so much fun in this work, she decided to move on from her 16-year career in academia. Shifting the gears from her academic life to becoming a founder has been an exciting journey.

Figure 8 Thinking helps companies transform their business models and leaders advance their perspective by applying wonder, rigor, and foresight. Natalie helps clients think and work through the following questions with an emphasis on landing on tactical next steps: “What’s our purpose?”; “What’s the business we should be in versus the business we’ve been churning in?”; “What’s our next?” To that end, Natalie offers two major services: keynote speaking and strategic advisory services to executive leadership teams. For example, the Foresight Studio is a great way to equip your company with future thinking techniques, design thinking principles, and an actionable roadmap.

Natalie has painted her canvas with the color of her dreams and shades of her remarkable character. She is a woman of substance and vision.

Natalie’s mission is to change lives with ideas and to help people realize that creativity is not a nice to have, it’s a must-have. She’s fond of saying that creativity is the engine for innovation and a capacity that individuals and companies must have for the future of work, as technology becomes more ubiquitous.

She doesn’t experience a lot of resistance while leading men. Any resistance she does encounter, she tackles by engaging these individuals by asking questions, getting their opinions, and inviting them to actively contribute.

She learned this technique a long time ago when she was a middle school English teacher (probably the best preparation she has had for all that she has gone on to do!) and also later as a professor of young adults and graduate students. At the end of the day, people want to be seen and heard.

Natalie conscientiously and intentionally makes time for pauses and movement in her life. That includes short walks throughout the day as well as regular dance classes. She is a student of ballroom and hip-hop dance techniques and a steadfast doodler. Any form of art, be it dancing or singing, acts as a catalyst to recharge from the daily hustle and bustle of life. Implementing and learning new dance forms give Natalie a room of fresh air from her work.

Natalie’s near future aspirations include publishing her next book which will be about flourishing during times of rapid change and ubiquitous technology. She also plans to identify a strategic corporate partner with whom she can digitize her creativity ecosystem- for example, her WonderRigor™ Discovery card deck is ripe for digitizing at scale.

Understanding the need of the hour, she knows digitization plays a key role and helps cater to a larger audience base.

A Delicious and Diligent Advice

“Keep your eye on the doughnut- not the hole!”

Ramya Parashar: A Woman in Tech driving the space with Passion, Perseverance, and Panache

Most Empowering Business-Leaders Leading Through The Change