Home Most Influential Marketers of the Year 2022_Profile Story 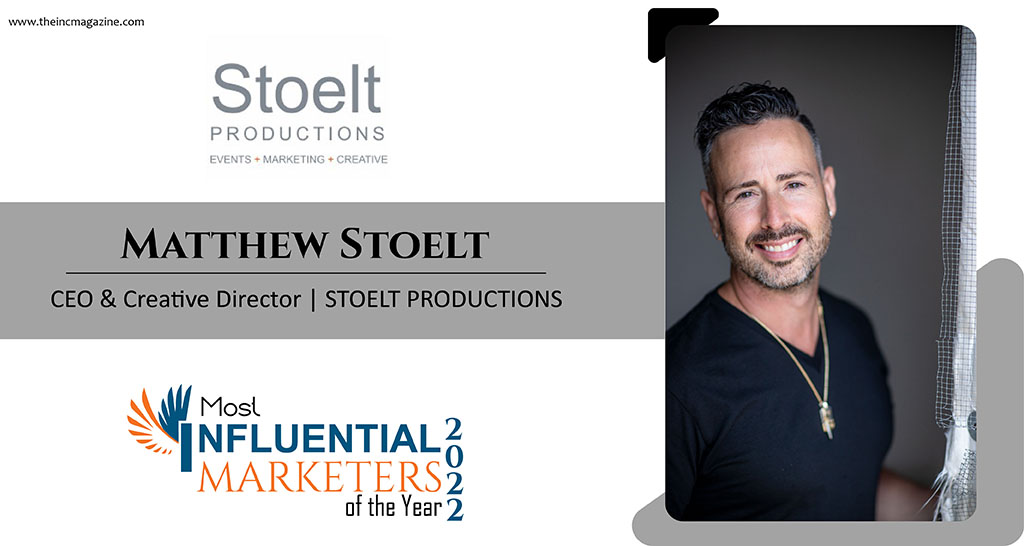 Meet Matthew Stoelt, the CEO and Creative Director of Stoelt Productions, LLC, a world-class event, marketing, and creative firm with offices spread across Los Angeles, New York, and Miami. As a prolific production designer and seasoned event producer, Matthew has successfully created and executed a few of the most high-profile events for the entertainment and business world’s elite. His ability to translate his client’s needs and ideas into world-class large-scale event production has positioned him at the top of his field.

From a very young age, Matthew started working with his father, who had a Detroit-based shipping and logistics business. Initially, he worked through almost all business capacities starting from dispatch, warehousing, driving, operations, and management, which helped him gain the confidence and knowledge to start his own business. Soon after completing high school, Matthew started working part-time, running events and promotions for a local nightclub. While working at the nightclub, he met a representative from Chicago Based KBA Marketing, who suggested Matthew to put together a résumé for a position in their field office for a new program they were launching for the Detroit market.

Soon, KBA hired Matthew as a Field Manager under the City Manager position, which oversaw the entire program, field office, and market operations. Leaning into his father’s logistics infrastructure before the program’s launch, Matthew received all the materials and started the program simultaneously at 20 venues on New Year’s Eve. Shortly after this, he went to Chicago for training and was promoted to the position of City Manager at the age of 23. Since then, he worked for over two years in Detroit, running the program before being promoted to Regional Event Manager and relocating to Chicago. As a Regional Event Manager, Matthew was responsible for 12 markets and an annual event portfolio of nearly 2000 events. He continued in this capacity as Midwest regional events manager, the West Coast, and ultimately East Coast regional event manager before leaving the company in 2001.

After spending over half a decade at KBA Marketing, Matthew relocated to Los Angeles and returned to work on the same account at another agency as a National Events Manager; and worked in this position for nearly three years before they discontinued the program. This agency experience enabled him to understand clients’ needs and agency operations. Utilizing his experience, love, and interest in design, Matthew launched Stoelt Productions, LLC in 2003 to end the disparity between concept and execution.

Having worked for two different agencies for nearly a decade, Matthew quickly identified the vast and constant disparity between concept and execution. He always wanted to end this disparity by providing a better client experience and single-source production. Sadly, all too often, concepts and promises were being made with massive budget overruns with diminished results.

However, Stoelt Productions, LLC’s in-house turnkey production and design approach differs from all other agencies. From the ground up, Matthew and his team design all their experiences in-house, including full-service ideation, rendering, and visualization.

“Most other agencies our size rely on outside services for design and rendering to bring ideas to life. However, because we do all this work in-house, we have an innate understanding of every single detail and component of the project, resulting in budget efficiency, elevated client experience, and flawless results.”– States Matthew.

Since its inception, Stoelt Productions has been at the forefront of all facets of event technology, including lighting, audio, and video, allowing the company to offer its clients a full-service offering with the newest and most advanced technical production tools. For example, much before social channels and influencers dominated the marketing mix, Stoelt Productions leveraged its in-house content capture, photography, and live streaming to extend its clients’ reach. This, along with the firm’s full-service in-house design and production capabilities, maximizes time, budget, and design integration.

During the devastating pandemic, the firm’s approach to virtual events produced in studio hybrid events vs. the one-on-one, face-to-face model. Utilizing its REMI Studio in Los Angeles. Matthew’s team sent camera feeds back to their studio in Burbank from across the country and switched the show locally, integrating content, graphics, and lower thirds. The opportunity to produce several of these events has resulted in a natural extension for the organization’s clients. It offers robust, turnkey hybrid, live streaming, and complete recording/editing services. Also, beyond its technical capabilities and service offerings, Matthew and his team offer full-service 3D renderings, motion graphics, and graphic design studios, allowing seamless workflow while maximizing time and budget.

Being the organization’s founder, Matthew feels designing and producing a great event is just the beginning. Next, the firm focuses on providing a fantastic client experience, which includes constant contact, updates, transparency, and budget performance.

Matthew considers his team a partner and an extension of his client’s team, so he is not interested in producing just one event. Instead, he would like to produce them all, which has helped his firm grow and thrive for nearly two decades.

Matthew feels as an agency, Stoelt Productions has been fortunate to service some of the same brand teams for the better over two decades, a rarity in this industry.

However, as an industry veteran, Matthew feels this is one of the most trying times the event industry has ever witnessed. The influx of supply chains, combined with staffing shortages, event cancellations, much shorter lead times, and lower budgets, has made executing events incredibly difficult.

“I would love to see more young people join the industry as we had so many incredible and talented people leave due to the pandemic and cancellation of events over the last two years.” – He states.

Preparing for the Future

When it comes to the future, Matthew and his team are focusing on developing and implementing automated tools to support the industry for the better. By using the team’s collective experience and robust roster from the Productions is working on launching a division to develop a web-app-based event management tool that will support venues, agencies, vendors, and producers.