Home The 10 Most Inspiring Business Leaders Making a Difference 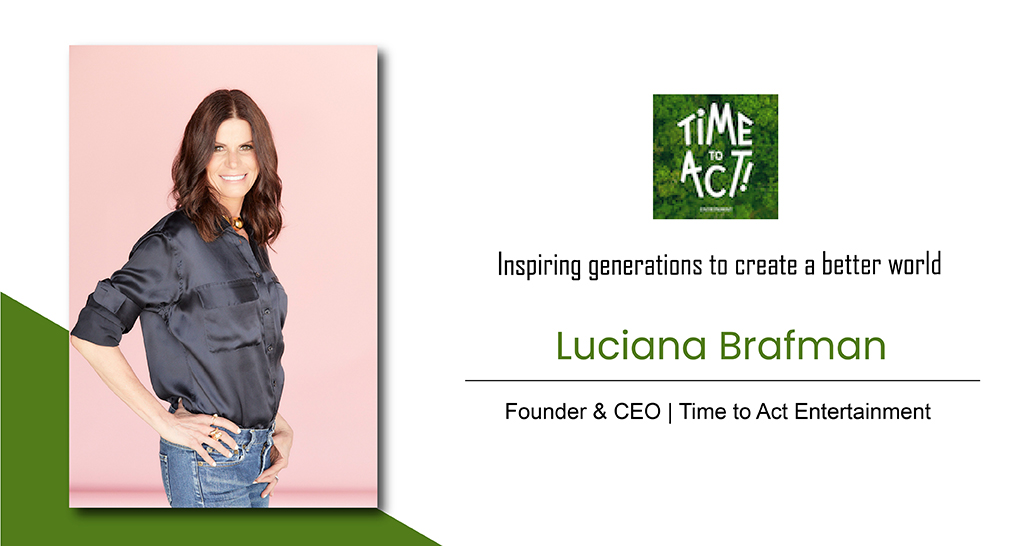 Meet Luciana Brafman the founder and CEO of Time To Act Entertainment, a transmedia company that creates content with the mission to educate the new generation through entertainment and technology while increasing awareness , galvanizing social responsibility and inspiring positive activism that helps promote fundamental change in our beloved planet. Luciana has over two decades of experience in developing award-winning projects in Producer and Executive Producer roles and she is two times Emmy® nominated producer for her work on Survivor, The Apprentice.

As a child, Luciana grew up in Rio de Janeiro to social activist parents that instilled in her a desire to change the world for the better. Her mother was an actress and producer so Luciana spent many weekends at the theatre in awe of her craft. “There was always something extraordinary about seeing all the elements combine to inspire and elicit strong emotion from an audience. While I didn’t initially choose a career in the arts, life would eventually take me down that path.”– She says.

Luciana later opted for Law School, moved to New York, and worked long hours as an attorney. She enjoyed the challenges and working through complex scenarios but soon realized that it wasn’t her ultimate calling.

That’s when Luciana had an idea for a play and collaborated with a writer to produce an off-Broadway passion project at La MaMa experimental theater institution, which eventually presented her with an opportunity to make a movie for Montel Williams. Finally, she left law behind and moved back to Brazil to start a production company focused on independent films and documentaries about pressing societal issues.

Based on her work portfolio, CBS contacted her production company an hire her to produce ‘Survivor,’ during which she spent nearly a year in the Amazon rainforest. She will never forget that experience; it has helped her reconnect with the environment, meet local communities and increased her desire to create inspiring content with real-world impact.

After years of making others’ visions a reality, Luciana started Time to Act Entertainment in 2021 to entirely focus on creating and developing projects to raise awareness about pressing issues on society , galvanize social responsibility, and inspire activism that promotes real change in the world.

After her son was born, Luciana’s time with him inspired her t co- create an interactive children’s show with her friend Jeanine Kay, which they sold to Hit Entertainment, the home of Bob the Builder and Thomas the Train. At this point of time, Luciana realized that most successful shows encourage learning with entertainment as the primary focus.

She says, “As my son got older, he and his friends spent more and more time interacting through video games. It made me worry that kids were staying indoors on their devices and missing everything happening in the “real” world. I knew there had to be a way to bring “edutainment” to mass audiences in a way that was fun, engaging and inspirational.

As a transmedia company, Time to Act Entertainment is dedicated to inspiring real-world change through original, impactful, and entertaining content for kids. Time To Act is creating a series of platforms to engage young thinkers to express their views on climate change. The first project, Climate Dreams, is a collection of filters to communicate dreams, concerns, and to call others to action, using social media as a tool to extend the reach of their ideas.

The Climate Dreams filters will place the user in an emergency scenario linked to the climate issue, such as in a fire, drought and flood. The user will have 15 seconds to communicate his or her vision on what could stop the advance of climate change. The collection of filters will be available on Instagram and at Time To Act’s website. They will also be presented in offline installations in high-traffic locations around the world, as well as at Time To Act’s new CLIMATE DREAMS App which will be up at the AppStore by March 2023.

The aim of these installations called Climate Dreams Box is to engage the traveling public in the campaign and raise awareness about the effects of climate issues on human life on the planet. Provoking people to engage in changing patterns of consciousness for the future of human life. Questions of the drivers of global warming and degradation of our environment should trouble us in this experience. The proposal addresses several themes within the climate crisis. Thus, the perception of the need to put an end to the exploitation of fossil fuels, the deforestation of forests, the industrial production of animals, the extinction of native peoples, and everything that leads us to global warming, provokes a will to act.

Think of the melting ice that raises sea levels, the drought, the air pollution, the famine, that result in the need for forced displacement of people, all of which are causing… wars.

Time To Act searches for ways to broaden this awareness, an attitude for paradigm changes. The Climate Dreams Box installations give us the desire to change our standard of consumption and think about life with our positive contribution.

We believe that spreading the ideas of these young thinkers can inspire others to build a better future.

“Children are our best hope for a better, more inclusive and accepting world, but they can’t fight if they’re not a part of the conversation.”

As the company grows, Luciana and her team aspire to partner with organizations such as SOS Amazonia Fund which Time To Act is partnering -up on the pre-launch of the Climate Dreams Instagram and Tik-Tok filters and its Climate Dream Box. (https://timetoact-ent.com/climate-dreams-box/) in Egypt during Cop 27.( Additionally, the company is also exploring a few unique funding opportunities and partnerships with several online and offline artists to benefit social impact organizations, and non-profits focused on causes including pollution and deforestation.

Under Luciana’s leadership, Time to Act Entertainment is working to become the leading platform for content that inspires the next generation to engage with the world and enact change. The organization’s key differentiator is its dedication to creating impactful content that follows three principles;

Growing as a Leader

Luciana understands that the world evolves very quickly, so she is constantly reading and tapping into those around her to gain new perspectives, guidance, and input. As a leader, one must be curious and open to learning new things and confident to ask for help in emergencies.

“If you don’t believe in yourself, getting others to believe in you will be hard. As a leader and entrepreneur, you will likely have to say no and hear it more than you would like.

There will be setbacks and pivots, and things will take longer than you expect – confidence in yourself, your team, and the overall vision will keep you on track to achieve the end goal. And more importantly: always think from the end !”– She asserted.

Getting Ready for the Future

Currently, Luciana’s focus is on launching the CLIMATE DREAMS BOX, which she will launch at Pivô Art Space in São Paulo, Brazil with an installation about activism where she will showcase a short documentary about environmental activism and two CLIMATE DREAMS BOXES where visitors can record their concerns and dreams about climate emergency. She is also securing additional funding, and finding the right partners to grow with. Currently, Time to Act Entertainment is also getting ready to launch in 2023 a TIME TO ACT ART, a platform to sell NFTs from established artists engaged on environmental issues. The proceeds from NFTs sales will go to an organization that supports the environment and will also be used as seed money to fund TTA’s projects that support the environment.

Every day Luciana speaks with several amazing organizations and constantly searches for the right non-profit partners, corporate sponsors, investors, and artists to join Time to Act Entertainment’s mission of creating change and bettering the planet for future generations.