Home The 10 Most Innovative CEOs in 2022_Cover Story 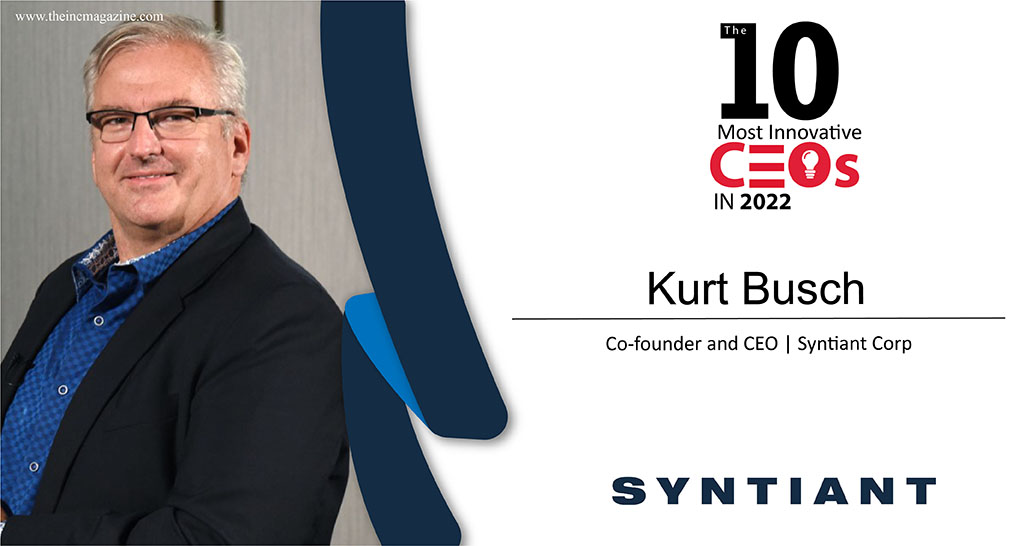 Meet Kurt Busch, father, husband, scoutmaster, and the Co-founder, and CEO of Syntiant Corp., an AI chip company providing end-to-end deep learning solutions for the deployment of always-on applications in edge devices. Throughout his career, Kurt has developed extensive experience in product development, driving cultures of innovation for global teams at public and private technology companies. Before Co-founding Syntiant, Kurt served as the CEO, President, and Board Director of Lantronix, a global provider of secure data access and management solutions for IoT and IT applications. He has also served as the Senior Vice President and General Manager at Mindspeed Technology, a leading supplier of semiconductor solutions for communications infrastructure.

Kurt has earned Bachelor of Science degrees in Electrical Engineering and Biological Science from the University of California at Irvine, which has also inducted him into its Engineering and ICS Hall of Fame in 2015. Later in 2020, he was recognized as a distinguished alumnus of The Henry Samueli School of Engineering. Recently Kurt was named Ernst & Young’s Entrepreneur Of The Year® 2021 Pacific Southwest – Orange County.

In late 2016, Kurt observed that his industry was in deep consolidation, which went from hundreds of public semiconductor companies to less than 80. The chip industry had matured driven by a desire for profitability at the expense of risky R&D investments, and was ripe for a new wave of start-ups to drive innovation.

At the time, artificial intelligence was relegated to the cloud, where, unconstrained by area and power, large and energy hungry GPUs and CPUs were used for parallel computations. That’s when Kurt and his co-founders set out to change the world by making a new kind of processor – one that would bring deep learning artificial intelligence right to the edge.

When friends and family heard that Kurt was starting an edge AI chip company, the response was often “that is really funny, there hasn’t been a successful chip company started in close to 20 years, what are you really doing?”

Not to be deterred, Kurt and his team persevered. Today, more than 20 million Syntiant Neural Decision Processors (NDPs) have been shipped to customers all over the world, bringing powerful machine learning from the cloud into even the tiniest devices, thereby greatly increasing battery life, privacy and responsiveness, while simultaneously decreasing infrastructure costs.

Syntiant Corp. is now an industry leader in delivering end-to-end deep learning solutions for artificial intelligence AI applications across various industrial, medical and consumer use applications Its NDPs are 100x more efficient than previous solutions while producing at least a 10x increase in performance. Much like a GPU brings AI performance to the data center, Syntiant’s NDPs bring AI performance to most any edge device. It is not just the performance that Syntiant brings, but the new use cases it enables. By using Syntiant devices, companies can easily build and deploy products with natural interfaces that listen, speak, see and feel all without the need of a cloud connection. These natural interfaces can enable anyone, regardless of education or background reap the benefits of technology.

Kurt often states, “No one wants to buy from a start-up. Customers will not risk their business on a product from us if they can get something close from an established company. Ten, fifty or even one hundred percent better will not cut it. Only a truly exceptional product will cause leading customers to bet their future on a start-up. Our focus always has been to be truly exceptional in everything we do.”

As the CEO of Syntiant, Kurt is particularly keen on team building, employee motivation, and development. With the belief that leaders should try to make a difference in their workers daily lives, Kurt strives to ensure Syntiant’s employees will be better off after it. This has led to Syntiant being named to the Orange County Business Journal’s “Best Places to work in Orange County” three year in a row.

To date, Syntiant has raised over $120 million in funding, and it is backed by several leading strategic and financial investors, including Intel Capital, Microsoft’s M12, Applied Ventures, Robert Bosch Venture Capital, the Amazon Alexa Fund, and Atlantic Bridge Capital.

Its processors have been adopted by products as small as earbuds to as large as automobiles. But Syntiant did not stop with just providing a new kind of processor. Its leaders understood that the biggest barrier for adoption is ease of deployment, so, the company developed the means to collect and augment training data, and the toolset to create high quality machine learning models for its processors.

Kurt says, “We’ve accomplished a great deal in the short time since our founding in 2017. We are going to use AI to make interfacing to most any device a natural as can be. We will be breaking down barriers of adoptions to make technology accessible to anyone, anywhere”