Home The Most Admired Women Leaders in Business 2022_Profile Story 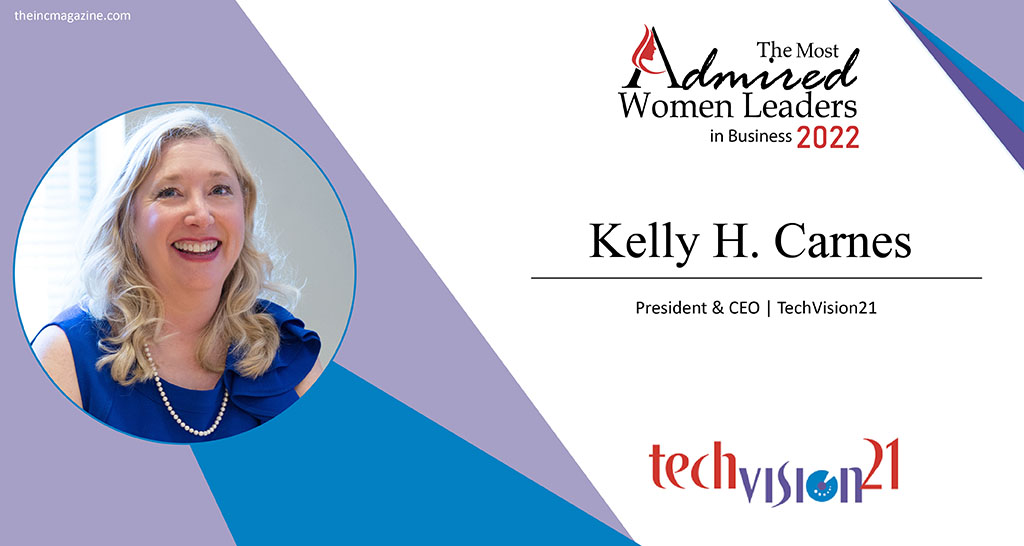 Meet the Honorable Kelly H. Carnes, the President and CEO of a Washington DC-based technology TechVision21, strategy firm. She attended the University of North Carolina at Chapel Hill to pursue her undergraduate degree in History and Political Science. She received her law degree from the Georgetown University Law School and worked at a Washington, DC-based law firm for more than eight years.

During her tenure as the Assistant Secretary for Technology Policy, Ms. Carnes provided the much-needed strategic direction and management oversight for a multi-million federal agency. She also spearheaded various sophisticated and highly leveraged public-private partnerships to promote technological innovation, and led various Presidential and Cabinet-level technology initiatives. Ms. Carnes represented the United States in negotiations with foreign governments and directed the research, writing, and publication of more than 25 reports on issues such as innovation, technology, and competitiveness.

Ms. Carnes has been a regular speaker at various national and international technology and business conferences, and has been quoted numerous times in the media. She has also served on multiple boards and commissions, including the Institute for Material Science Innovation, the Senior Advisory Council for the Director of National Intelligence, the Steering Committee for the Commission on the Advancement of Women and Minorities in Science, Technology and Engineering, and the National Governor’s Association Commission on Technology and Adult Education.

Launched in 2001, TechVision21 recognized very early that the Federal government is so complicated that even the largest and the most sophisticated organizations need assistance in understanding how to work with government.

The firm’s core team members have over three decades of experience in various public and private sector roles. The team includes senior executives who have led teams and won Federal contracts, grants and appropriations for large-scale and complex defense, public safety, and health information networks. The firm has deep expertise in semiconductors, advanced manufacturing, and renewable energy.

Since its inception, TechVision21 has helped many governmental and non-profit organizations evaluate programs, make policy recommendations, and develop influential reports, including work for the Office of Naval Research, the Army, Navy, Air Force, and the National Association of Manufacturers Center for Workforce Success.

TechVision21 also has helped its clients to create various R&D centers and compete for Federal funding to support their projects. An expert in Federal budgeting, TechVision21 has successfully worked with multiple agencies, which include the Departments of Commerce, Energy, and Defense, as well as the National Science Foundation.

TechVision21 creates efficiencies by recruiting various clients with similar interests, so the expertise it builds can be used broadly across the company’s client base. Ms. Carnes is inspired by the quality of innovations and groundbreaking ideas that come to the firm. She says, “We seem to attract very creative people who want to work with us. Most of our business comes from referrals; it is gratifying that for over 20 years, our current and past clients have recommended us confidently to their friends and colleagues.”

Ms. Carnes considers herself fortunate to have many mentors and role models. However, the most important person for her was Mary Good, the Under Secretary of Commerce for Technology. She had an amazing career, serving in various leadership positions in the industry and government at a time when women were not well represented in any of those roles.

Since the first half of 2020, the majority of the world’s population has been affected by the pandemic. Governments across the world decided to impose lockdown and work-from-home orders to curb the rapidly growing infection rate. Like most organizations, this sudden shift from in-person meetings to Zoom calls was challenging for TechVision21and other small business. Even two years into the pandemic, many people inside and outside the government are still working from home, which makes it more difficult to develop personal relationships needed to take projects forward.

“As the pandemic is easing with widespread vaccination, we look forward to more in-person meetings in the months ahead.”– states Ms. Carnes.

Ms. Carnes suggests young female entrepreneurs be prepared for a business’s ups and downs. She believes in defining a niche for yourself that plays to your strengths and is unique. When she first started, she made a lot of assumptions that turned out to be wrong. For example, she thought finding clients would be difficult, but soon realized the greatest challenge was getting paid in full and on time.

She says, “It is not unusual for a client to start a project and then determine they are in over their heads and drop out. Almost every client I meet wants to pay at the end of the project. Don’t agree to this; get some payment up front and be prepared to stop work if the payments stop.”