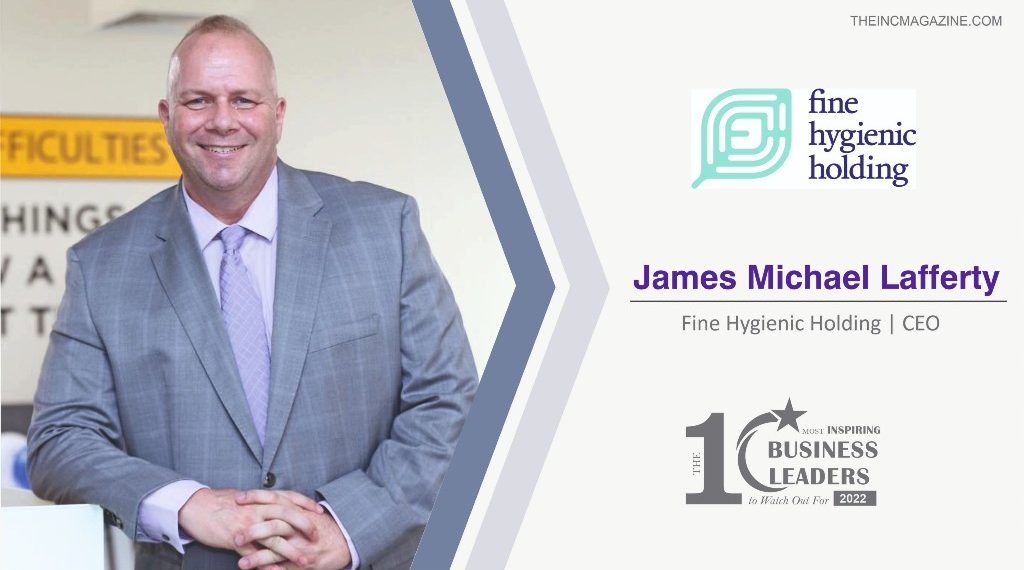 James Michael Lafferty: Making the World a Better Place to Live in

Do you believe in destiny? No? I know! Many of you will tell there’s nothing called destiny, it’s all about hard work. Whatever you say! When I first learned about James Michael Lafferty, CEO of Fine Hygienic Holding, my belief in hard work and destiny got even stronger. Yes! I’m a strong believer in destiny, and James’ story has inspired me quite a bit. Taking responsibility for at-risk kids and bringing them out of the darkness of crime at the age of 21 is no easy feat.

In 1984, James Michael Lafferty founded his own company to offer consultation to companies under the idea, “A healthy employee is a better employee.” Soon, he got hired by his hometown company Procter and Gamble as a fitness instructor in 1984. While working at P&G, James used to teach senior employees how to become fitter, manage stress, and lose weight and lose weight.

During his tenure at P&G as the fitness instructor, James met a Senior Executive, who suggested him brand marketing. However, he was only 22 years old then and had no idea what brand management was. Still, he went through the interview process and joined P&G Brand Management Program in 1985.

Out of all the MBAs James was hired with, he survived till the last and made it to a CEO level in P&G (later companies like Coke, BAT, FHH) across some of their most iconic and big roles, leading the company in the Philippines, Western Europe, and Central Europe.

Desire Takes You a Long Way

For James, the secret to success is not only a piece of paper, it is in possessing the tangibles. The first one is desire. James says, “I can teach almost anything in life and certainly in business. But, I cannot coach desire, this must come from within.”

He always wanted success more than others, so James took every new role, leaped into new projects, and worked long hours. According to James, “Desire is 50% of the battle in life. If you have the desire, you are on the way to greatness. Because the rest can be taught.” During his journey, many people were beaten by him, who were much smarter and had much more connections than him. The reason? James desired those things more than they did.

James believes the second tangible is the leadership he says, “We could talk about leadership for weeks and weeks, but let’s try to keep this simple. I learned all I ever needed to know about leadership as a youth track coach, coaching 200 at-risk 13- and 14-year-olds to avoid the distractions of the neighborhood drugs, crime, etc.” However, it’s not always easy to get them to come and sweat when they can earn easy money from drug dealers.

James Michael Lafferty took over the role of CEO at Fine Hygienic Holding on 1st April 2018. Before joining FHH, he served in companies like P&G, Coca-Cola, and British American Tobacco. His management expertise helped him consult for organizations like HP, Newell Rubbermaid, Hershey’s, GE, Nestlé, Microsoft, Wal-Mart, and many other Fortune 500 companies.

After joining FHH, James Michael Lafferty pivoted the company in 2019, just ahead of the pandemic to being a wellness company. He with his team at FHH launched masks in early February 2020, before masks came into the recommendation. The organization eventually ended up saving thousands of lives with its products. Currently, with new products like MotivaLine, FHH is helping to improve Alzheimer’s disease and other disorders that are based on inflammation. Under the watch of James, FHH is saving lives and helping families across the world.

Line, FHH is helping to improve Alzheimer’s disease and other disorders that are based on inflammation. Under the watch of James, FHH is saving lives and helping families across the world.

James Michael Lafferty believes, there are three irreplaceable elements of leadership. The first one is authenticity. Here James suggests leaders/entrepreneurs stay real, so people can relate. When James was a 21-year-old college kid, coaching 200 at-risk youth, he earned their trust by being authentic. He had no inherent credibility other than authenticity to earn their respect. He adds, “You hear these descriptors like, “He is fake” or “She is plastic”. These are signals of people putting on airs and faking who they are.” James believes that people in real life are smart. They figure this stuff out, and they can sense if someone is faking it or not. So, step one of leadership is to be authentic. Be confident in your shoes.

James’ second element of leadership is having the right moral compass. Nowadays, we can see many leaders, who fundamentally fail even after having a big following because of their corrupted moral compass. James Michael Lafferty believes, great leaders must be driven by ‘doing the right thing’, which has always guided him. Even at the tender age of 21, he wanted those kids to succeed as student-athletes and as humans. Therefore, he made them study, took them fishing, and discussed their lives, dreams, and worries. James helped to build lives, and even after 40 years, many still talk to him. So, getting the moral compass right and doing the right thing will eventually pay off.

Lastly, great leaders are mostly visionary. While coaching at-risk kids, he understood drug dealers offered them money as a vision. However, James Michael Lafferty told them, “Listen to me, I will make you great and you can go to college on a scholarship and change your life.” Eventually, many of them did just that. So, it was all about envisioning, and creating a vision that can improve people’s lives.

Three Choices will Change the World

As a leader and life coach, James Michael Lafferty always believed that each one of us has three routes to choose from;

James Michael Lafferty says, “The choice you make will define your happiness or lack thereof, and it will define your sense of purpose.” Nowadays, there’s too much discussion around the subjects of ‘purpose’ and ‘happiness’ as we have lost simplicity.