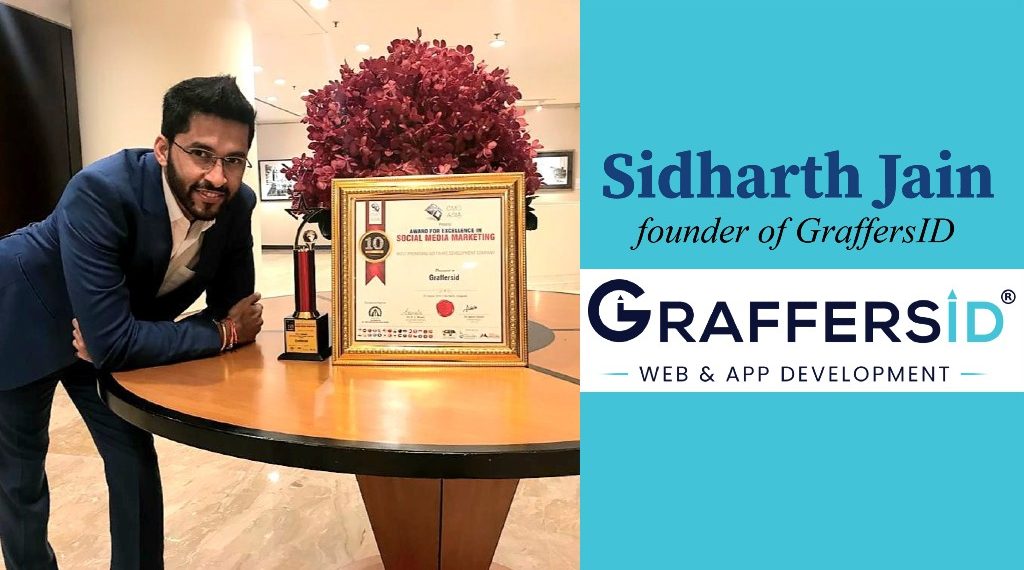 How Sidharth Jain built a successful IT company GraffersID that is serving global market leaders?

“There are no limits on what you can accomplish, except the limits you place on your own thinking”
Sidharth Jain, founder of GraffersID: an award winning Website and Mobile App Development Company. He is on a mission with his team to increase the startup success rate by being their tech partners.
He was born and brought up in a small-town Barwaha, which is about 60 km from Indore, after his schooling he got a college education from Mumbai. Laughed and Mocked by the other students in his initial years, the struggle started early in his life.
With no previous knowledge of the technical field, there was a mountain to climb for Sidharth. And, he did it.
With some assistance from good friends and aspirations to become the Best, Sidharth gave it all to learn the technical aspects. His mindset after college life was changed. He chased every single opportunity and conquered the best results.
After his college he looked for job opportunities in IT sector and gets one to work with biggest IT Company at that time where he learned market-leading technologies and impressed the team in the first 6 months itself.
While the office and work was amazing, he understood that the technologies used were pretty old and people were working on same products for 5-10 years. It seems pretty repetitive for him and don’t find new learning opportunities. After completing 2 years in the same company he quit and focuses more on tech and startups.
When he started his journey to create billion dollar company, he noticed that startups are struggling. Many startup clients had shut down and others were struggling to stay afloat. After finding the reason he realized there is a huge gap in the IT domain.
From his saving he took a co-working space for 4 month started writing blogs and spreading his knowledge on social platforms like Quora, LinkedIn, and Medium.
People supported and appreciate his efforts on Quora, and LinkedIn and he became a top writer in Startup category in few days. Soon, Sidharth realized that he is capable of helping more people and in many ways.
The Rise of GraffersID – Most Reliable tech partner for Ambitious Startups
With his mission of multiplying the startup success rate (from 10% to 90%), he launched GraffersID in 2017. At the initial stage, he managed almost work of the company himself.
After getting his first project in the name of GraffersID, he starts hiring skilled and talented team of designers and developers. They prefer to hire talent over degrees. Within few years, team size of GraffersID has grown up to 100+ employees.
Now, GraffersID is a team of design, and development veterans who share the passion for helping Entrepreneurs to bring their stories to life. GraffersID Team specializes in identifying the loopholes, in the flow of the application and then brainstorming the possible solutions to make the final product robust and market fit.
The first project was not a success that hit him very hard. The client failed due to late delivery and it impacted Sidharth directly.
From then on, he formed a set of values and always followed them. The same client came back to him because of his professional behavior and dedication. This time, the client bagged an investment in a seed-funding round. It was a remarkable achievement for a small team of GraffersID.
Sidharth and his team always focused on bringing success to their clients. From this experience, it was very clear that Growth & Success for the client is directly going to bring success to GraffersID.
Forming a result-driven system that outputs Client Satisfaction & Success
Smaller milestones never satisfied the desires of Sidharth. And, that is what made him chasing for more and more. In the initial years itself, GraffersID won “Best User Experience” and “Rising Star” IT Company awards.
Those were just the beginnings of what would become an inspiring journey later.
Constantly enhancing the processes of Hiring, project management & project delivery, a system was formed which ensured 100% client satisfaction.
Ongoing hard work resulted in prestigious awards for the team of GraffersID. Being recognized by Clutch as “Top 15 Web Development Companies in India” and Zoom awarding as “Most Impactful Company”.
The struggles of years were producing scintillating outcomes for this motivated team. Sidharth was recognized in the list of 50 Most Influential Youth Marketing leaders.
The Client-first approach and user-centered product development made GraffersID among the world’s best tech service providers.
Awards and Recognition were milestones that proved that GraffersID is on the right path of growth. Working with GraffersID, the success rate for Startups was +80% as compared to 10% in general.
GraffersID has disrupted a major market already. With bigger targets and goals, GraffersID is going ahead in the journey along with helping more and more startups.