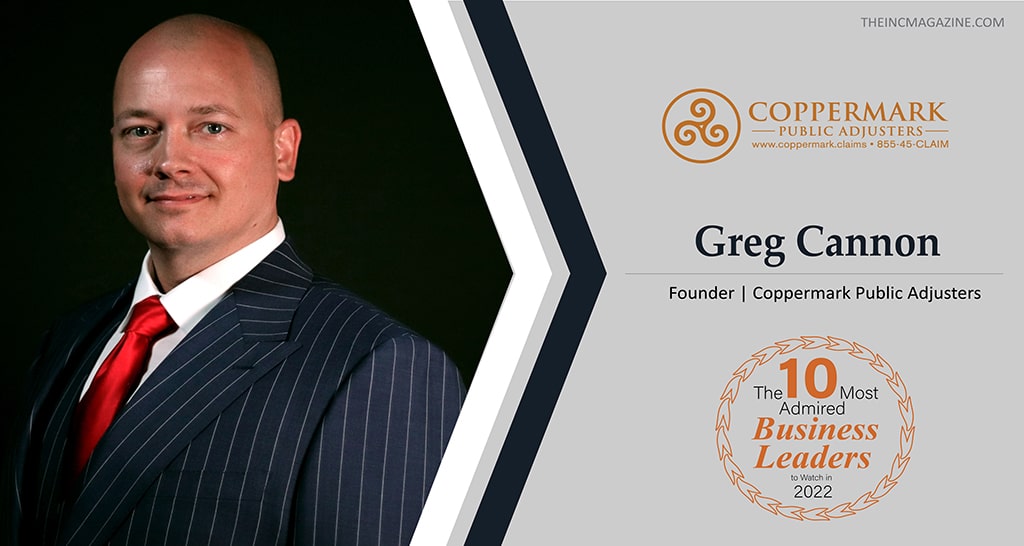 Meet Greg Cannon, the founder of Coppermark Public Adjusters, who started up very small with just him in a tiny one-room rented office space. As it turned out Greg had a knack for negotiating and settling large and complex insurance property losses because of his construction and insurance restoration background. In the first two years, Coppermark grew 500% per year and the following two years.

Greg Cannon helped the company to grow at 300% per year. Greg grew up in The Colony, TX as the oldest of three children. He joined the Navy shortly after completion of high school and finished his degree not long after being honourably discharged. While Greg was in college, he started selling roofing and restoration services for a restoration company that specialized in hail, wind, hurricane, and tornado damage insurance claims. After five years with that company, Greg started his construction firm. Over the next 10 years, Greg and his colleagues have helped thousands of business owners and homeowners with their property insurance claim construction projects in 14 different States. Shortly after his daughter was born, Greg decided the stresses involved with owning and running a construction company were more than he wanted to continue, so he gave up his construction license, passed the exam for his public adjusting license, and opened Coppermark Public Adjusters in 2017.

Becoming an Entrepreneur is Scary

When Greg started his first company, the decision did not come lightly. He feels, becoming an entrepreneur is scary and there’s a lot of liability involved in construction and insurance claim settlements. Greg knew that he didn’t like the way the company he was working for had changed directions. Greg Cannon wanted to apply newer technologies and some automation to how they operated. He knew in his heart that it was possible to become more efficient and take on more volume without sacrificing the quality of work.

Greg says, “As a business leader the most difficult part of what I do is staying ahead of the opposition. I love the saying “adapt and overcome”, and that’s what we have to do every day to stay on top of things.”

There is no room for comfort or complacency in this business. Greg Cannon knows that he and his team have to work every day to get smarter, more knowledgeable, and stay abreast of everything that’s happening within the industry. The majority of his motivation comes from making his clients happy and whole again after they suffered a loss to their property. Greg Cannon is fairly competitive by nature, so he sees that as a win, even though it’s not a game.

When it comes to motivating employees, Greg Cannon feels, he was fortunate but also very meticulous in selecting and hiring the Coppermark team members. He strongly believes in the ClifftonStrengths 34 test and he manages his team member’s strengths and needs. Greg is not a believer in a single size fits all approach.

Led by Greg Cannon, Coppermark Public Adjusters has already developed systems to automate the claims investigation and negotiation processes for property claims in particular. The firm can handle a large volume while not letting its quality of service slack off. The firm’s system is always evolving as things in the industry change, and different aspects of claims negotiation come to light.

Greg feels the current landscape of the market that Coppermark Public Adjusters cater to is getting worse year after year. More and more insurance claims are being wrongfully denied and delayed, and the average property owner has no idea how to navigate their insurance policy and State Laws well enough to ease the anxiety. Most of it seems to be cost-cutting measures on the side of the insurance company’s claims departments but whatever the excuse there’s a much larger need for public adjusters to negotiate and settle insurance claims than ever before.

Above any other accolades or accomplishments, he has made over the years Greg feels a sense of pride from the Chamber of Commerce award for the 6th fastest growing company in the entire Metroplex. Growth is something that Greg takes very seriously and doing it correctly while maintaining a good reputation and service is very important. When it comes to the future, Greg believes, the company and he will continue to grow exponentially in the short term. He and his team already work on insurance claims nationwide, but he would like to expand over to Europe in the next two years.

When we asked Greg to provide some suggestions for young entrepreneurs, he says, “My advice to budding entrepreneurs is, take your time to do some research and planning, don’t be reckless, but don’t wait.” He adds, “You have to move forward. Everything hinges on that first leap and if you don’t even make that then you can’t learn how to fly.”

Nicola Garelli: Changing the World of Insurance for Better