Home The 10 Most Inspiring Leaders in HR Sector_Profile Story 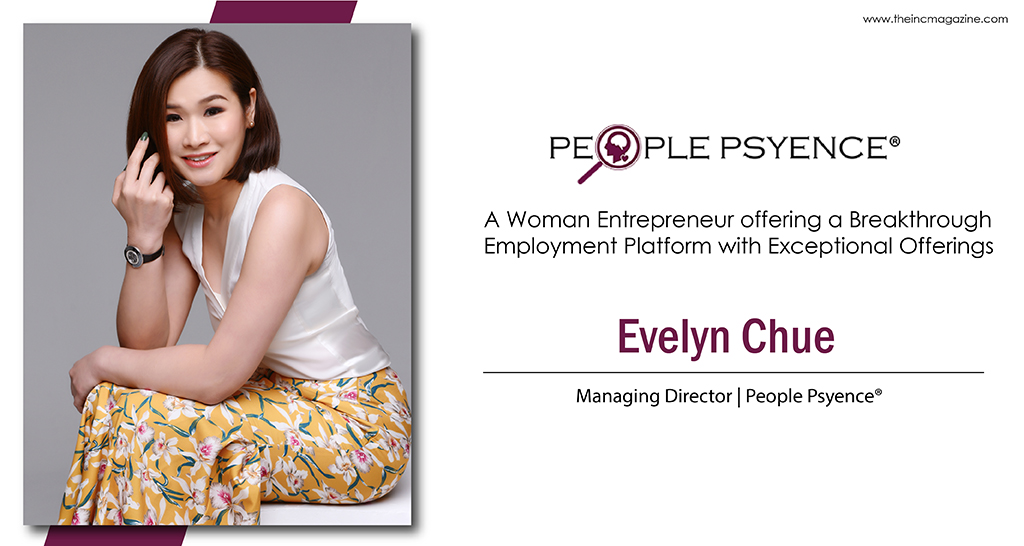 A dynamic personality, Evelyn Chue is the Managing Director of People Psyence®. She wears many hats and excels in each of her roles. From being a Women Icons Malaysia 2019 award recipient, a personality in the first edition of Successful People in Malaysia Britishpedia, an employer, a leader, and a mother of two, Evelyn is a woman with a Midas touch.

The Journey to the Forefront

In her earlier years, she attended Kuen Cheng Girls’ High School in Kuala Lumpur, which enforced traditional discipline. Many who know her now may find it hard to believe, but Evelyn used to be an incredibly timid person who rarely spoke up or took the lead.

Now, on the contrary, she is an outspoken person who is fearless in trying out unconventional ideas that revolutionize how things are done. She attributes this drastic change to her life-changing experience as a foreign exchange student at Bunkyo Gakuin in Japan under the Rotary International Exchange program, which taught her to step outside of her comfort zone.

Evelyn took a double major in IT/Business at Coventry University, UK, and had her first job in an IT firm shortly after. While journeying her career path, she was introduced to the world of Psychometric Assessments. From there, she began to take a keen interest in human behavior and its impact on the workforce. It became a passion, so much so that she pursued another degree in Psychology at Upper Iowa University, USA, while working full-time.

She was offered a job in Thomas International Malaysia (a business unit within Deloitte Consulting Malaysia) where she worked her way up to the position of Senior Manager, before deciding to take the plunge into entrepreneurship in 2013.

Evelyn parted ways with the company and founded two ventures within the same year, People Psyence® and Evant & Co.

She chose to exit the latter in 2015 to focus exclusively on People Psyence®. Her latest establishment is Eunoia which was started in 2019.

Founded in 2013, People Psyence®’s bread-and-butter is their wide range of Psychometric Assessments created by global industry leaders that help clients to recognize and analyze incoming and current HiPo talent to ensure the best fit within the organization, as well as develop and retain those talents. Recently, the team has also begun to create its suite of assessments to cover any missing gaps in their repertoire.

People Psyence® also offers a consulting service, where they utilize design thinking and gamification to further aid and follow-up with clients in their needs, such as recruitment, onboarding, learning and talent development, and more.

Taking the Leap of Faith

With an extensive experience in the employment industry of over 20 years, Evelyn wanted to truly test her limits to see how far she could go. Closing out sales was significantly easier with the power of a big brand behind her back, so now she wanted to see how far she could go without it, even though it wasn’t an easy path to take. Of course, that was just her intrinsic motivation. There was also an external factor that influenced her path.

Traditionally, HR practitioners in companies used to go about their duties like a checklist while treating the human element as secondary. Some still do. But look, HR isn’t purely transactional; it’s the business of people, and those in the field should be looking first and foremost at People as an asset. These individuals all require sufficient engagement, consideration, and development – something that becomes more and more challenging to do with objectivity as companies grow to the scale of hundreds or even thousands of employees.

That’s where People Psyence® comes in. They conduct evaluations and provide clear data and diagnostics to provide insight into the People, and that ensures that any decisions HR departments make are that much more meaningful, strategic, and value-adding. Evelyn loved the idea, and eventually, she convinced herself to step beyond comfort.

So, in essence, there was a market niche to fill, and she took a leap of faith. The rest is history.

Evelyn is an excellent leader, who leads with empathy and compassion toward her team and staff. She puts herself in the employees’ shoes to understand their wants and needs, and meet them as best she can. She maintains an honest and open relationship with them so they can always share their concerns and feedback, which she reflects upon and takes into full consideration.

Her job also allows her to scope out many outstanding leaders from different fields and industries; she makes sure to learn from the best. She also enjoys listening to podcasts on management, resilience, and mental health matters in her free time.

The range of assessments the People Psyence® team offers is unrivaled in SEA. They offer a wide range of highly-validated assessments from several industry leaders such as Saville, AQR International, Accelium, and Test Partnership, along with a few up-and-coming world-renowned principals. In addition, most members of the People Psyence® Assessment Team are qualified Registered Test Users with the British Psychological Society (BPS) and the European Federation of Psychologist’s Associations (EFPA), wearing ethics on their sleeves.

The organization also offers more than just diagnostics. It also maps, proposes and executes post-diagnostic programs and information to clients via their in-house consulting team as a follow-up to close any gaps quickly and efficiently.

In Evelyn’s point of view, the gender pay gap stems from a social imbalance deeply entrenched in society. Fortunately, with the current trajectory of societal transformation, it is looking to correct itself given time as long as everyone recognizes it as a legitimate issue and does not turn a blind eye to it.

Meanwhile, the gender pay gap truly does not exist within People Psyence®; Evelyn values merits and contributions first and foremost. She hopes to set a personal example for the employees with her now, who may eventually go on to assume positions of responsibility in the future. With such a thought-provoking mindset, Evelyn is leading by example, essentially.

For Evelyn, employees are the biggest assets of the organization. Every organization begins with the people. Hence, every employee’s well-being is of paramount importance. It’s the entire reason why she created Eunoia (www.eunoia.zone) in 2019 to begin with.

Underperformance is often due to employees having personal issues on top of work issues, and helping them resolve them is important. She believes that if the organization doesn’t take care of the employees, they will eventually collapse and productivity will grind to a halt.

To employers, her advice is to do a Mental Health Index check within the organization, and if possible, “Consider having your own in-house mental health first-aiders on-site. Build a culture to tell employees that “It’s okay to not be okay.” You’ll find employee performance skyrocketing when they’re well taken care of,” Evelyn shared.

The path ahead for People Psyence® is all about spreading its wings. It is looking to go global, starting with Southeast Asia. Its approach is through digitalization, the great equalizer. It wants the ability to scale and empower its clients further, giving them the option to self-apply some of its service offerings.

And to that end, her team has created OZ (www.oz.zone), an end-to-end, all-in-one Talent Management System digital platform, which had a soft launch earlier this year, it’s still growing as more modules and functions will be added to it.