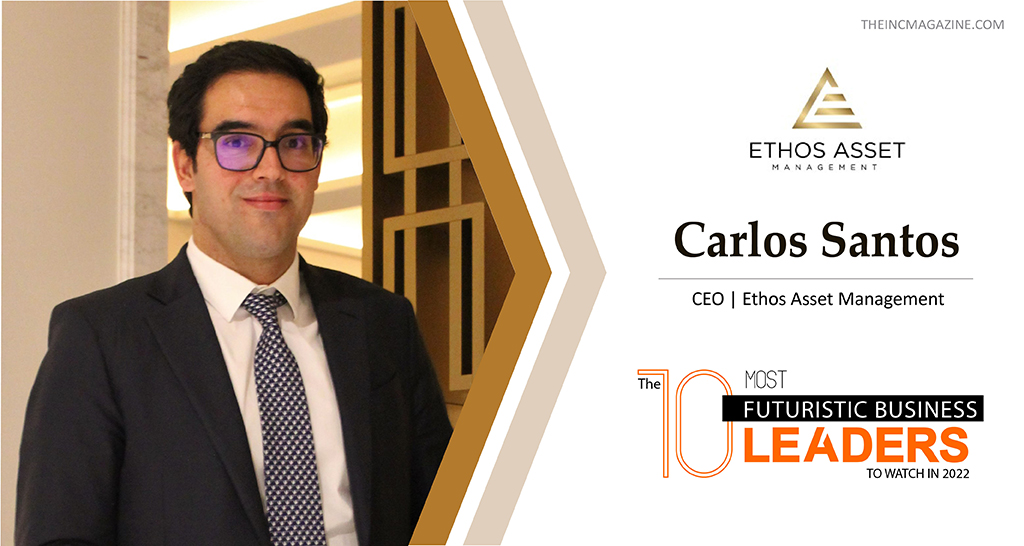 Born in an upper-middle-class family, Carlos Manuel Da Silva Santos chose to study Economics. After achieving 18/20 values, Carlos started teaching at a university and created his first private company, where he made his first million. However, in 2015 Carlos Santos lost everything. He made wrong investments, was subjected to many scams that he could not recognize, and lost millions quickly.

Everyone he knew criticized his way of living. But soon, things changed; Carlos recovered and continued doing the same. “The capacity to think and work to make things better, doing what I enjoyed with passion, being resilient, and working with principles were and are the best things in the world. In the end, the opportunities appear.”– says Carlos.

Carlos founded Ethos in Portugal in 2012. During its initial days, Ethos leased an algorithm to major investment funds that were paying royalties to Ethos. When the organization entered the market in 2014 and 2015, these investment funds traded $300 billion through this structure. Thanks to the market’s volatility, investment funds proposed Ethos to operate in a different structure that could help them avoid market volatility. In order to do that, they flowed the funds to Ethos, order to do that, they flowed the funds to Ethos, which increased its total assets. Later in 2019, Carlos assumed the position of an advisor for Monetary Policy in Dollars. Soon, the board of directors of Ethos decided not to lease the algorithm anymore; instead, Ethos itself decided to start trading its own funds.

Ethos is currently present in 72 countries across the world. Carlos has been directly involved in the organization’s business areas like project financing and financial trading. He holds a bachelor’s degree in Economics and several Master’s degrees in Finance, Banking Accounting, and International Taxation. As a reflection of his professional and educational excellence, he was recognized by Men Leaders to Look Upto Award (2021), the Africa Dubai Honours Award for Excellence and Leadership Prowess (2021), and the Ernst & Young Award: Best Economist (2016), and Banco de Portugal Award (2015).

At first, Carlos’s goal was to guarantee that investors could model financial markets without making any losses in financial investments. “I was trying to utilize my proprietary algorithm, which alerts in line with ‘enter and exit positions in the commodities, currency, bonds, futures and share markets.”- he says. Using an aggressive risk modulated strategy, Ethos spreads and accumulates profits through compounding, which helps it achieve gains in a completely safe way that could never be performed in the market.

Carlos Santos decided to diversify and invest in project financing at that point, which eventually allowed him to make long-term investments with fixed returns.

He aimed to bring capital to various sectors that other financial entities were not focused on, trying to understand why.

He says, “Why would someone not invest in South Africa, Laos, Swaziland, or Brazil? Soon I realized that the macroeconomic and operational risk related to such entities was the reason.”

Carlos Santos soon understood that a financial instrument issued by a bank allows the seller to migrate the operational and macroeconomic risk to the financial market. This eventually allowed him to have a net asset discounted to the present value of the financing to not need to be 100 % of the investment. This was the innovative factor.

All countries, economies, and companies face challenges. The pandemic has been a challenge for Ethos and the entire global banking system in general, Carlos Santos took this opportunity to create a new Ethos.

Helping Employees to be Productive

Carlos Santos says, “Our human resources are the most valuable asset that we have. In such way to allow them to maximize their thinking capacity and innovate know how we need to create the environment for that.”

To do that, Ethos tries to understand their personal and professional needs guaranteeing that it misses nothing about them and their families, which will allow them to stay focused 24/7. Ethos is well known for the quality of its people, and its exceptional results show how differentiated it is. “We have an abundance of talent, no doubt, but beyond that, we also have a distinctly collaborative culture, which we have worked hard to preserve over the course of the pandemic. We have welcomed thousands of new potential clients to our firm in the past few years, and it was important to us that they experience first-hand what it’s like to be Ethos.”– adds Carlos Santos.

Ethos has a pay-for-performance culture, where it rewards people who drive its growth. However, it also has a shareholder-aligned compensation framework that entirely depends on the equity awards to incentivize long-term value creation, and that compensation can be adjusted according to the performance.

Advice for Younger Self

When we asked Carlos Santos to provide some suggestions for upcoming entrepreneurs, he said, “Work, always respect all the people around you. Understand that anyone can bring you something. And work hard. Never give up. When you lose, see it as a lesson and use it so that next time you won’t repeat the same mistake.“He also adds, “Remember that when you fail you are one step ahead because you will not make the mistake that others may make. Never stop, because when someone stops, you will surpass them and make it possible.”

The 10 Most Admired Business Leaders in 2022