Home The 10 Most Admired Business Leaders to Watch in 2022_Article 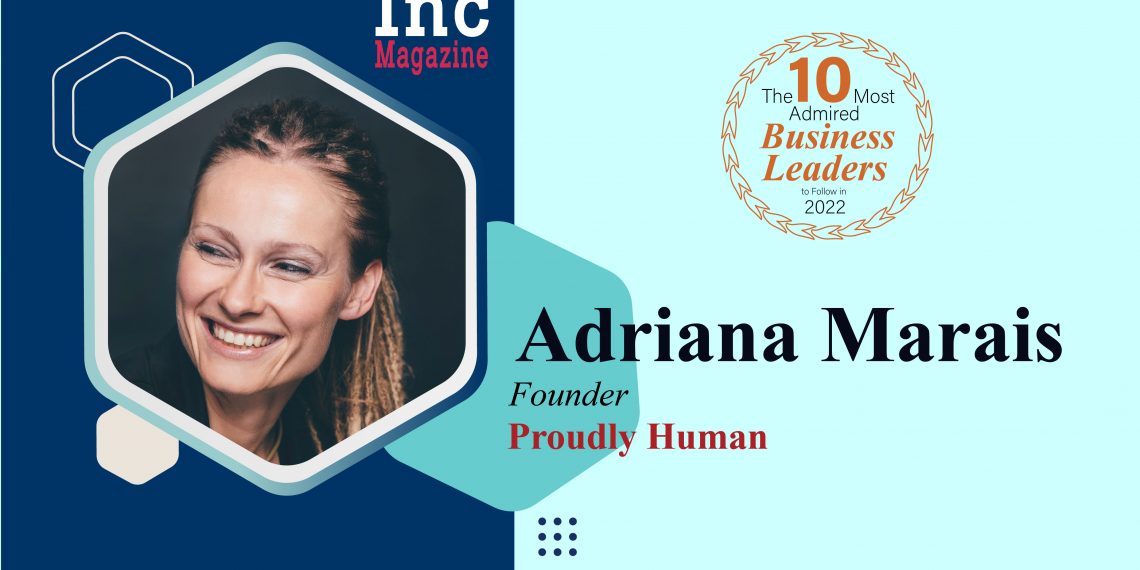 Dr. Adriana Marais has a background in theoretical physics, her PhD and postdoctoral work in quantum biology focused on photosynthesis and the origins of the building blocks of life in space. In 2019, Adriana Marais left her position as Head of Innovation at SAP Africa to found Proudly Human, and she is currently leading the organisation’s Off-World Project: a series of off-grid habitation experiments in the most extreme environments on the planet, in preparation for life on the Moon, Mars and beyond, as well as a sustainable future on Earth. She has travelled to deserts in Africa and Middle East, as well as all the way to Antarctica on location scouts for the project. Adriana Marais is currently a Director at the Foundation for Space Development Africa, developing Africa’s first mission to the Moon, the Africa2Moon Project.

Adriana Marais is currently a Director at the Foundation for Space Development Africa, developing Africa’s first mission to the Moon, the Africa2Moon Project. She is Scientific Moderator on Space Resources with the Geneva Science and Diplomacy Anticipator, and Chair of Space Sciences at Tod’Aérs Aeronautics and Space Research. She is also Faculty at the Singularity University and Duke Corporate Education.

We’re living in an era of rapid technological development, and the space industry has played an important role. Curiosity-driven space exploration is something to be proud of, a celebration of our humanity and the reality in which we find ourselves. However, massive growth in both our population and industry is having a destabilising impact on our life-support system. The result: climate change, extreme weather events, increased risk of pandemics, inequality and conflict. Billions of us are already living in extreme conditions without access to safe shelter, clean water, nutritious food, and neither the reliable power and communication systems necessary to participate meaningfully in this era.

As a society, we face the greatest challenges and opportunities we have ever faced: Mars is within reach, while on Earth our life-support system is under threat. We live in a time where we need to balance ambitious goals that inspire us to dream, like the first off-world communities, while simultaneously uplifting people already living in extreme conditions here on Earth, and encouraging a rapidly growing youth to get excited about exploring and learning.

Proudly Human takes up the challenge by applying knowledge of how we will live off-world to improve standards of living on Earth. Through our Off-World Project, we will demonstrate sustainable community living in some of the harshest environments on our planet, towards community spirit in extreme off-world conditions, as well as climate change resilience in resource-constrained environments here on Earth.

The Off-World Project is a series of habitation experiments in some of the most extreme places on Earth to prepare for life on the Moon, Mars and beyond. The project will promote our partner companies developing technology for sustainability, facilitate skills development, boost research, innovation and technology towards off-grid functionality, as well as provide a vision for young people of community spirit in even the harshest environments through grit, imagination, research and technology towards a future we can be proud of, whatever planet we are on.

The first edition of the Off-World Project will kick off with a carefully selected team spending 39 days under the Atlantic Ocean offshore from Cape Town in a submarine. Living underwater provides an analogue for a community in an environment without breathable air. The conditions of isolation and confinement within the habitat providing necessary life-support, have parallels with the long-duration spaceflight necessary to travel to Mars or beyond. Additionally, a submarine environment has close parallels with what crews can expect when exploring the intriguing subsurface ocean worlds of Outer Solar System moons like Europa and Enceladus. The team will live as a research community under the ocean for 39 days the flight duration to Mars on Ad Astra’s experimental VASIMR rocket. They will operate and augment existing infrastructure on the submarine, including power, water, food and communication systems, for the duration of the experiment. The team members that make it through 39 days under water, will go on to the next round, simulating arrival on Mars.

The Namib is the oldest and one of the driest deserts on Earth. Like Mars, the sand has a distinctive rust colour from the iron oxide content, geology is characterised by ancient water flows, and water management is critical to survival in the now extremely arid environment. Next, the team will live as a research community in the Namibian desert for 40 days during the driest months of the year. They will build their infrastructure from scratch, including shelter, power, water, food and communication systems, and leave no trace of their presence on departure. The team and the infrastructure keeping them alive will then travel north, to face the final test of 40 days of darkness at the North Pole.

The conditions during winter in the Arctic Circle provide a unique research opportunity to prepare for life on Mars, with average temperatures of around -40 degrees Celsius and weeks of complete darkness. Putting the infrastructure utilised in Namibia, as well as the team spirit developed over the entire project, to the ultimate test: while tapping into abundant resources such as wind, ice, and even the cold, the team will live as a research community for 40 days of polar night.

If you are interested in applying to be a part of Proudly Human’s Off-World team, or if you or your company develops technology that could form part of the settlement infrastructure that we will test and showcase in the most extreme environments on the planet, please visit our website proudlyhuman.com. If, however, you have your feet firmly on the ground and would prefer to follow the Off-World Project from the comfort of your home, you will be happy to know that the entire Off-World experience will be broadcast for a global audience though the documentary, Mission: Off-World.

Watch this space! We will be launching the project later this year.

The 10 Most Inspiring Business Leaders to Watch Out for 2022