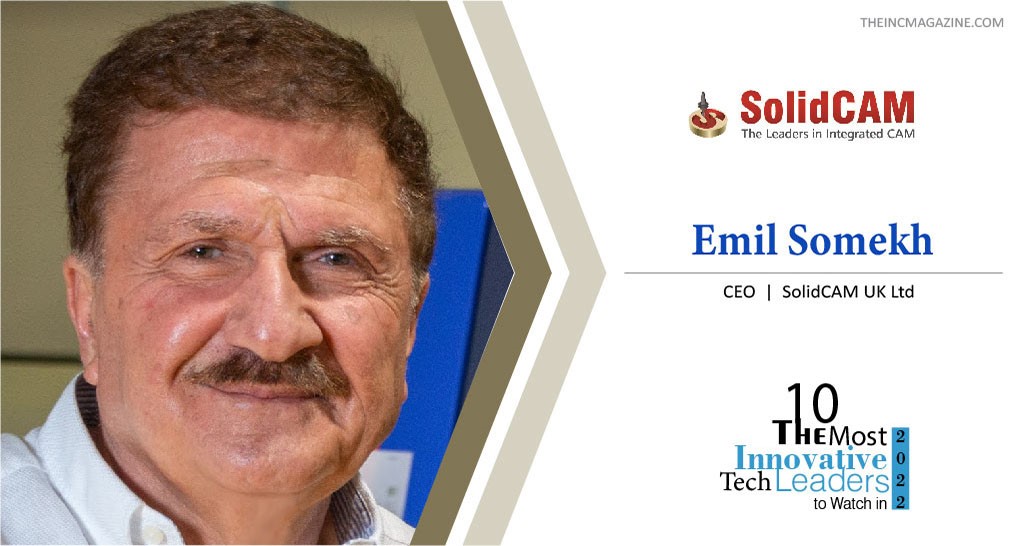 With the original intent of developing 3D CAD software for the IBM PC for vocational education, SolidCAM was founded in 1984 by Dr Emil Somekh. Later the company added integrated CAM software and started selling CAD/CAM for CNC manufacturing job shops.

Emil Somekh was working in a big aerospace company, developing various CAD/CAM products. While working in the aerospace industry, Emil Somekh has continued with his research work for his doctorate at the Technion. After finishing his doctorate, Emil started teaching part-time at the Computer Science Dept at Bar Ilan University.

When the IBM-PC was launched in 1982, Emil decided to start his own company to develop CAD/CAM software for the Windows PC environment. So, he bought two IBM PCs, with financing from his father, to develop the software. Emil hired two of his students from Bar-IIan University to work on the 3D CAD system.

AutoCAD from Autodesk was then only a 2D CAD system. Emil developed CADTOOL, a 3D CAD system. Emil then installed several CADTOOL systems in some ORT schools to get the teachers to start using it. It was not long before the technological educational institutions from all over the country, especially the ORT and Amal networks, became very interested in the software and thousands of units were sold.

Development of CAM software for CNC

Machining and breaking into the global market Emil Somekh was not satisfied with conquering the technological education market and decided to break into the important industrial sector. He then met a prospect from a CNC machining plant, who expressed a need for an efficient and convenient software solution, that would allow him to program through his computer his milling and turning CNC machines, which cost a fortune. This was a deciding moment for Emil, and he decided to connect the CAD domain to the CAM domain and thus a CAD/CAM software for CNC manufacturing was born.

After SolidCAM software sales in the industrial sector gained momentum, Emil Somekh flew to Germany in 1989 in search of distributors for the European market. He recruited a CNC machine tool manufacturer as a distributor in Germany. Not long time later, Emil Somekh opened the flagship branch of SolidCAM in Germany, which currently employs 75 people in 7 branches, throughout the country.

Emil Somekh did not remain satisfied for a long time with the success in Europe and marked on the map the following next targets – USA, Japan, China and India. Today, the company is the leading CAM brand in the global CNC manufacturing industry and has branches, technology centres and a network of resellers in more than 65 countries.

One of the significant milestones of SolidCAM was the business and technological connection, as an add-in CAM product to the world’s leading CAD software SOLIDWORKS and others. This CAD integration strategy enabled SolidCAM to focus on optimal CAM development, which came as a powerful and reliable CAM add-in to popular CAD software, thus using the CAD distributors also to break into new global markets.

iMachining – the innovative technology that has revolutionized the CNC manufacturing industry

In 2011, SolidCAM stunned the CNC machining industry with an innovative technology called iMachining. This software calculates optimal tool path and optimal cutting conditions, taking into account the properties of the stock materials, cutting tools and CNC machines. By doing so, it shortens the machining time by over 70% and extends the life of the cutting tool 5 times and more, which leads to huge savings of time and money for all SolidCAM customers. The iMachining technology, is considered today the No. 1 exclusive technology in the CNC machining.

Under Emil’s leadership, the firm’s leading technologies, including the revolutionary iMachining, Simultaneous 5-Axis, and multi-channel Mill-Turn and Swiss, are tested in practical settings. The firm’s technology centre in the US is located in Newtown, Pennsylvania. SolidCAM has also technology centres in UK and

Emil feels, the main challenge in the first 2 decades was to manage cash flow when expanding, since SolidCAM’s only income was coming from its software sales, with no outside investment money, except Emil’s father’s financing at the start.

Emil believes his motivation comes from his firm’s success to develop an excellent, leading CAM product, used and appreciated by about 20,000 CNC manufacturing customers worldwide. When it comes to motivating staff, Emil believes, choosing excellent staff from the start, who love what they do, and do it well, means their motivation comes mainly from the success of the product and

The most rapidly growing section of the CNC machines are the Multi-Channel Mill-Turn and Swiss CNCs. SolidCAM today has the absolute best solution for CAM programming of these

SolidCAM has set itself the goal of continuing to grow and develop independently of external investors, maintaining its uniqueness and flexibility, and continuing to be at the forefront of CAM innovation for CNC machining of all CNC types, including the most complex ones.

To create rewarding experiences for our team, our clients, and the world we live in